Tambopata Was created in 1990, like Zone Reserved Tambopata – Candamo, south of Port Maldonado. 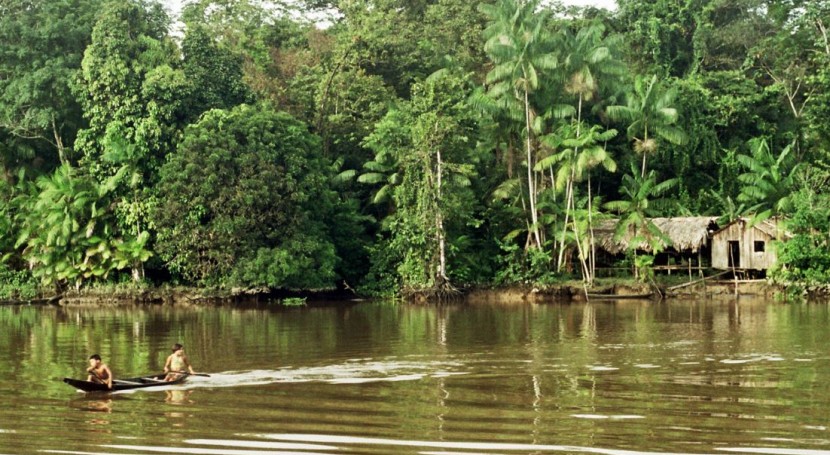 There is a place in the amazonía Peruvian whose wealths almost could equate to the told by the conquistadores in his mythical legend of The Golden.

But we are not speaking of the gold neither neither of wealths whose value puts of relief by cultural or historical reasons esgrimidas by the man, but of natural wealths that represent a good part of the biodiversidad, essential for the preservation of the life in our planet. And all they find in a place called Tambopata.

Selva Amazónica, or Amazonia is the selva tropical more extensive of the world. It considers that his extension arrives to the six million square km delivered between nine countries sudamericanos: Brazil with more than 50%, Bolivia, Colombia, Ecuador, Guyana, Peru that possesses more than 13%, Suriname, Venezuela and the French Guyana that forms part of the region ultraperiférica of the European Union.

The National Reservation Tambopata and the National Park Bahuaja Sonene find situated of contiguous way in the region Amazónica south of the Peru. They possess big wealth of flora and fauna and beautiful natural landscapes. Initially it created the area protected like zone reserved to starts of the year 90 and afterwards through a long process of query and negotiation with the sectors involucrados determined the definite areas for the reservation and national park.

The area presents big diversity of habitats, which allows the existence of species in abundance. The basin of the river Tambopata is considered like one of the ecosystems with main indexes of biodiversidad in the world. In the area protected can find a high diversity of vegetal communities, several forest species of economic importance like the cedar (Cedrela odorata), mahogany (Swietenia macrophylla), screw (Cedrelinga sp.), brown (Bertholetia excelsa), palmeras like pona (Iriartea ventricosa), aguaje ( Mauritia flexuosa), between others. Regarding the fauna, the area houses an important population of wolf of river Pteronura brasiliensis species in roads of extinction; likewise, species in vulnerable situation as I dare anteater (Myrmecophaga tridactyla), Armadillo giant (Priodontes maximus), maquisapa black (Ateles paniscus), jaguar (Panthera onca), espátula pink (Ajaija ajaja), taricaya (Podocnemis unifilis), Anaconda (Eunectes murinus) between others.

The National Reservation Tambopata and the National Park Bahuaja Sonene find in vulnerable situation by the diverse threats to which are subject. The most important threats are: the agriculture and invasion of earths, the minería aurífera, the wooden illegal extraction, the excessive extraction of other natural resources (meat of wild animals, fishes, fruits and leaves of palmera, amongst other), the paving of the road Cusco - Port Maldonado and the increase of the migratory processes to the region that increase the pressure and the threats on the area protected.

The main rivers that circundan or cross the area are the Tambopata, Heath, Malinowski, the Tower, Tavara, Candamo, Guacamayo, amongst other of minor envergadura. The area presents lakes or cochas related to the character meándrico of the rivers, marshes of palmeras and zones estacionalmente inundables. The rivers and broken present patterns of increasing and vaciante according to the period of the year, already was period of rains (November to March) or dry period (May to September) respectively.

The reservation Tambopata situates in the region Mother of God, in the basin of his same name. It covers roughly 274.000 you have., of the total of 1 million 478 one thousand of virgin earth, where house a diversity such of natural resources, flora and fauna, that are the astonishment of naturalistic and biologists that visit it. From 1990 Tambopata is a Reservation, thanks to which in principle his flora and fauna are protected in front of the depredación and the tala indiscriminada that attack against his existence... And ours.

What there is in this region is really surprising. The entomólogo and professor of the University of Harvard, Edward Or. Wilson, discovered that there were more species of ants in an alone tree that in all the British islands boards. Also it has registered the main quantity of species of birds in the world (575), and of butterflies (1.200). They have cataloged 103 species of dragonflies, 103 of mammals, more than 60 of amphibians, a big variety of fishes. This can graficar the real dimension of these earths, that well can define like paradisíacas.

The earths of Tambopata also are rich in minerals. In this reservation finds the main tank of minerals and clay of the world (called "collpas" in quechua), that feed 32 species of parrots and papagayos, 10% of the variety of this species in the world. The comedero situates in an enormous cliff of 50 metres, that extends 500 metres along splits it west of the river Tambopata. It is rich in nutrients, of which live mammalian, birds and insects, that form colonies in his surroundings. It is known that exist similar mineral banks in the banks of the river Tambopata, but this settlement is only for concentrating rare species of papagayos and parrots.

There it is possible to see a gigantic bandada of these plumíeros colorinches pose in the slopes to feed , what has been described by the National Geographic in 1994 like one of the shows more fascinantes that have seen of the wild nature.

But also there is there species in danger of extinction, conviviendo in perfect harmony with the nature, like the giant otter (Pteronura brasiliensis) and the eagle harpía (Harpia harpyja), or the cotomono (Alouatta seniculus), one of the 9 species of monkey, or the armadillo giant (Priodontes maximus), the wolf of river (Pteroura brasiliensis), the "dog of mountain" (Speothos venaticus), the "black lizard" (Melanosuchus niger), the ocelote (Leopardus pardalis), the jaguarundi (Herpailurus yaguarundi), the black alligator (Melanosuchus niger), and a big variety of papagayos, like the rojiverde (Plough chloroptera), or the papagayo blue-yellow (Plough ararauna), the one of blue head (Plough couloni), only for mentioning some.

Until medidados of the past century, neither the government neither the authorities loaned attention to this zone, by desconocer his importance and potentialities. However, scientific institutions like the Explorer´s Inn, began to investigate in the zone in 1975, headed by Max Gunther, settling in what at present it is the National Reservation.

Thanks to them it has a complete register of the species of birds that inhabit Tambopata, the one who constituted in one of the highest, for the astonishment of the national scientific community and international. Back explorations of zones colindantes like the one of Manu finished to put them in front of the eyes of the world attaining the recognition. Like this the UNESCO, in 1987, declared to this last, Heritage of the Mankind.

In 1996 it arose a project to create the National Park of Bahuaja-Sonene, in what it is the zone south and south-west of Tambopata, project that was approved on 17 July of the same year. At present said park covers 537.053.25 h., parts of the Sanctuary Pampas of Heath, as well as the region Tambopata-Candamo, with which share 271,582 h. And by the south, is border with another natural sanctuary: the one of Madidi in Bolivia.

In Tambopata subsisten native communities for those who the flora and existent fauna in the place possess a holy character. The most important are the That'eja and Tacana, that live in the current territory of the Reservation and to those who owes the name of the National Park Bahuaja-Sonene: the names in his dialect of the rivers Tambopata and Heath. To the west, finds the community Kotsimba and the community Arasaeri-Harakmbut to banks of the river Malinowski, This last has requested to the government the creation of the Communal Reservation Arasaeri that would join the national reservation of Manu with areas protected of Ucayali . North and in the peripheries of the zone protected conviven communities of etnias diverse like the machiguengas, yora, mashco piro and arawas. These communities have his quite diminished populations, product of the cultural violence, physical and by the migration of many to the cities. All they live in conditions of poverty and devote to the hunting and recolección of fruits to survive, as well as to the trade of skins and exotic animals. However, many of them prefer the complete isolation.

The two main communities of Tambopata are affiliated to groupings like the Native Federation of Mother of God and Tributaries, those that examine with the regional authorities and the central government, plans of development based in the ecotourism and the protection of the flora and fauna of the place.

An aerial trip from Cusco will carry us in 20 minutes to this immense greenish mantle that it is the selva of Mother of God, whose landscape is not more than the antesala for what expects us, once in Tambopata, that covers the National Reservation Tambopata-Candamo, the National Park Bahuaja-Sonene and the National Sanctuary of Pampas of Heath.

Transported by canoas, to the style of the lugareños, is possible to enjoy of the goodnesses of Tambopata. Guided by the lugareños, can go in to this Peruvian paradise, where the man still no done of his.