It discovers the fascinante Saws of Espadán, big macizo mountainous with cool ravines and leafy forests. 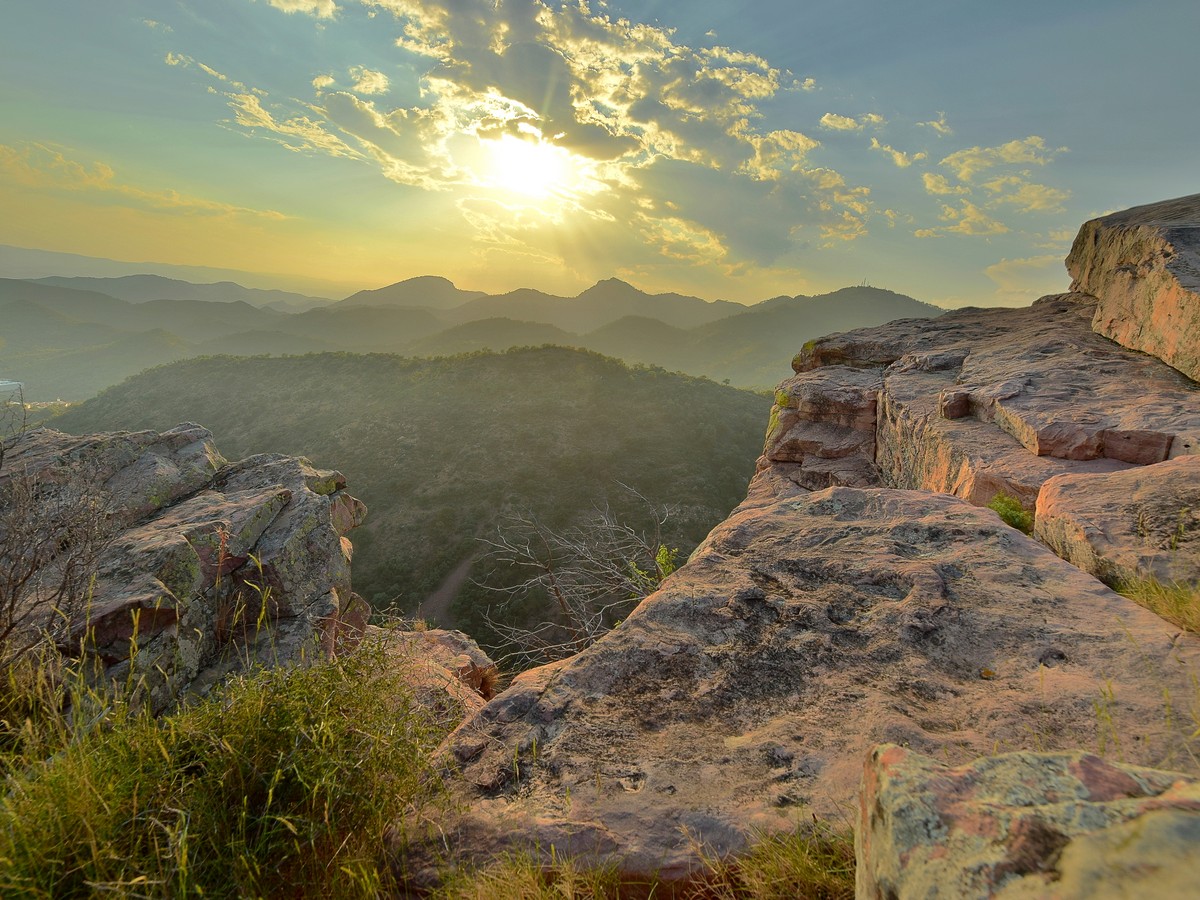 The Natural Park of the Saw of Espadán finds located south of the Province of Castellón, in the last estribaciones of the Iberian System, being one of the better natural spaces conserved of all the Valencian Community.

The Saw of Espadán is a big macizo mountainous with innumerable sources, cool ravines and leafy forests of alcornoques. Located between the regions of the High Mijares, High Palancia and the Flat Baixa, discurre between the basins of the rivers Mijares and Palancia.

The surface declared like park occupies some 31.180 Has. This fact turns it into the Natural Space Protected of main extension of the province of Castellón and the most extensive second of our Community. Of the 19 municipalities involved, 11 have all his municipal term inside the limits of the natural park (Aín, Alcudia of See, Almedíjar, Azuébar, Chóvar, Eslida, Sources of Ayódar, Higueras, Pavías, Torralba of the Pinewood and Villamalur); whereas the 8 remaining (Alfondeguilla, Algimia of Almonacid, Artana, Ayódar, Matet, Sueras, Such and Vall of Almonacid), only are included partially.

Chóvar Is a municipality of Arab origin, of some 400 inhabitants, situated to 410 m of altitude. It belongs to the region of the High Palancia and account in his term with numerous sources and rincones of big beauty.

During this route, that discurre by the ravines of Ajuez and of the Coal, will be able to enjoy of a very conserved forest of alcornoques, impressive cut rocky, with an intense reddish colour that contrasts with the verdor of the leafy vegetation, between which resaltan the ferns of big carry, and glorious panoramic; all this does of this one of the most beautiful landscapes of the Saw of Espadán.

The name of Ajuez proceeds of an Arab word whose meaning is "communal earths devoted to the pastoreo". The small wall that find in front of the embalse, has avoided that this cover of the sediments dragged by the torrential rains. It considers one of the scarce humid zones of the Natural Park as his waters, collected of the ravine of the same name, are of big value for the fauna.

In this so cool place and humid, the ferns develop a big size, arriving to hide the source. The term of the that derived cool, in origin meant merry, jovial, by the form of manar of this source and by his own sound. The Cool Source is one of the most appreciated enclaves by the inhabitants of Chóvar and by those that visit it. The waters that here manan are waters of rodeno, that is to say, waters without cal, very appreciated by those who have ailments of kidney.

We continue the way crossing a big canchal for later arrive to the mines of mercury. This mining complex, originariamente known like the Enebral, owe his name to the abundance of enebros. In the zone find several abandoned mines, for the extraction of the cinnabar of the that obtains the mercury. In the actuality the majority of them find closed given his high dangerousness.

The mine called “The socavón”  was the last exploded in Chóvar (1966) in her observe still the rests of the vagonetas, the rails, as well as some construction attaches.

In this point arrive to a forest track. In front of us we will see an alcornoque of considerable carry to whose feet hide the rests of an ancient trench. We continue to the right, we will observe a beak with antennas, is the Mainstay of the Aljub, of 948 m, that serves of beak of surveillance against fires.

From here, the itinerary offers the possibility to visit the Fridge of Castro, prolongando the length of the route roughly an hour more. Nevertheless, the main itinerary continues by the right, crossing the mining complex and allowing us observe, from up, glorious seen of the cut that draw the Ravine of Ajuez, until returning, again, to the embalse of the same name.

The fridges or pozos of snow are constructions that, in his majority, date of the 18th century. In them it stored and prensaba the snow collected during the winter to sell it in the coastal zones during the summer, since it possessed multiple uses so much medicinal as for the transport of foods and even for his enjoy that it allowed the origin of sodas and ice creams.

2. Barranc Of the Caritat

Aín Is a small population of 170 inhabitants, with a marked Arab origin and a care urbanístico that respects the typical appearance of the villages of Espadán. His white houses, his traditional lavadero, his mimado ordeal and his cool sources do the delights of the one who visits his narrow streets empedradas and engalanadas of flowers and plants.

The route initiates in the ordeal, with a hermitage of the 18th century, passes by the barranc of the Caritat until the castle of Aín, during the distance will observe an excellent example of vegetation of bank (fresnos, sauces, poplars, etc.), in addition to a leafy forest of alcornoques, that show us the sig-us of a resource ancestral: the cork.

The mills of flour constitute an authentic valuarte of the rural architecture of Espadán, moved by the waters of the barranc of the Caritat, these mills represent the historical evidence of the encouraged industry artesanal of the inhabitants of this village. In the actuality find in good condition, restored with hit taste like houses of veraneo. In the outside can observe the ancient stones used in the mill and an arch- aqueduct, with an ancient acequia by which circulate the waters of irrigation.

To the feet of this nogal beside a crossing of ways find several signals of footpaths, between them the GR 36 (red and white) that crosses all the Park Natu-ral from Vilavella until Montanejos.

To visit the castle of Aín will follow straight, for afterwards return to this same point.

We find us in a new crossing of ways, to the feet of the ruins of the castle, the to the right signposted detour like local footpath (green and white) and footpath of small route (yellow and white) rises to the collado of The Ibola, important natural step between two regions: The Flat Baixa and the High Palancia, by where at present crosses the road CV-200 (Aín-Almedíjar). From this collado besides can rise to the Beak Espadán, as well as head to us the population of Almedíjar, through footpaths of small route.

The castle of Aín (s. XII), situated in a small hump  in the middle of the ravine of the Caritat, historically was one of the most important cores of the resistance of the moriscos rebellious of the Saw of Espadán. Between the ruins stands out especially, the rests of the tower of the Homage and a turret of separate surveillance of the enclosure fortificado.

In the Region of the High Palancia, to 441 m. Of altitude, find a population of Arab origin that has almost 300 inhabitants and receives the name of Vall of Almonacid. So much in his urban area as in his municipal term has an important historical heritage and natural. When visiting the population can contemplate Marries it Palace, the Parish Church and Marries it Abbey, an architectural group of undoubted interest.

The route initiates and finishes in Vall of Almonacid. During the route will cross terrains of crop of regadío and an extensive olivar and will visit the ruins of the Castle of Almonecir, one of the most important castles of the saw of Espadán.

Around the population find us with a zone of regadío where abound the frutales like the cerezo and trees like the almez, employed traditionally, by his hardness and flexibility, in the manufacture of claves and handles of tools, an application still into use in the valley of Almonacid. His big capacity of subjection of the terrain has done that it situate him usually in the banks of bancales, where does not subtract space to other crops and, at the same time, his strong and big roots attach the earth in periods of torrential rains. This tree is known by numerous names, between them: latonero, llato-nero, allatonero, caicabero, “ledoner” and, even, gaiatonero.

In the vicinities of the castle, due to the fact that they appear rocks limestones, can observe the typical Mediterranean pinewood of Pino Carrasco, with thickets so known like the Romero, the Coscoja or the Aliaga.

To visit the castle of Almonecir, divert us to the left for afterwards return to this same point.

We descend to Algimia of Almonacid through diverse ways between extensive fields of olivos, cultivated in the bottoms of valley and even slopes with strong slopes, this tree still constitutes an important resource, by the big quality of the oil obtained from the variety  Serrana of Espadán.

We happen near of the population of Algimia of Almonacid, population of Arab origin, situated in the Region of the High Palancia, to 486 m of altitude that has less than 300 inhabitants.

When we arrive to the course of the laugh boy head to our point of origin: Vall of Almonacid.

This Castle of Muslim origin of the 12th century - XIII. It was in reality a monastery fortificado or ribat , inhabited by a community of monks Muslim warriors, the muràbitin and called to the-munastir, name that derives of the Latin monasterium, that with the step of the time has evolved to Almonecir and recently to Almonacid.

Between the rests that observe, fits to stand out the impressive Tower of the Homage with some walls that surpass the 18 m. Of height, the aljibe restored and rests of the defensive wall.

﻿A comment in "Natural Park of the Saw of Espadán"