The PN of Yosemite situates to roughly 320 km to the east of San Francisco, in California and is one of the emblematic places of the montañismo American. 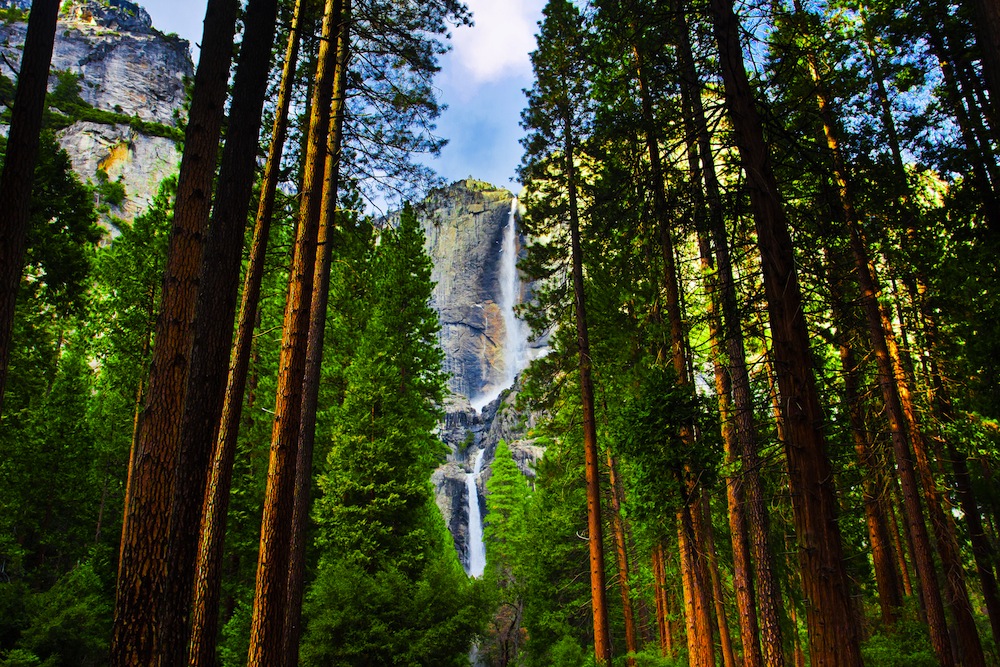 The park covers an area of 3.081 km² and extends through the oriental slopes of the mountainous chain of Sierra Nevada (United States). It is visited by more than 3 million people every year, and the big majority only visits the part of the valley Yosemite. It was designated World-wide Heritage of the Mankind in 1984 and is recognised internationally by his cliffs of granite, jumps of water, crystalline rivers, forests of sequoias giant and the big biological diversity (near of 95% of the area of the park is designated wild zone). It was the first willing park by the federal government of the United States and through the work of people like John Muir was a notable point in the development of the idea of national parks.

Yosemite Is one of the biggest habitats and less fragmentado in Sierra Nevada, and possesses a big diversity of plants and animal. The park has in average an elevation of 600 to 4000 metres and contains five main zones of vegetation: area boscosa of oaks, vegetation of low mountain, vegetation of high mountain, subalpine vegetation and alpine vegetation. Of the 7.000 species of plants of California, near of 50% find in Sierra Nevada, and more than 20% inside the Park Yosemite.

The geological training of the area is of rocks of granite and remainders of rocks more ancient. It does roughly 10 million years backwards, Saw Nevada suffered an elevation and afterwards was bent until forming the relatively soft slopes west and the most pronounced slopes east. The elevation stressed the degree of inclination of the rivers and brooks, forming narrow and deep cannons. One million years ago backwards, the snow and the ice accumulated forming glaciers in the alpine meadows higher and moved downwards the valleys of the rivers. The downward movement of the mass of ice cut and esculpió the valley in shape of Or that attracts nowadays to big quantity of visitors by his particular landscape.

It possesses more than 1.300 km of marked footpaths by which can walk . They exist 5 very differentiated sections for the visitors:


1. The valley of Yosemite

The valley of Yosemite represents so only 1% of the area of the park, but is the place where arrive and remain the majority of the visitors. The captain, a prominent cliff of granite that discerns on the valley, is one of the most popular destinations of the world between which practise climbing in rock, because of his different degrees of difficulty and numerous routes of promotion established, in addition to being accessible during all the year.

The park possesses three forests of añejos trees of sequoias giant (Sequoiadendron giganteum): the forest Butterfly (200 trees) the forest Tuolumne (25 trees) and the forest Merced (20 trees). The sequoias giant are one of the highest trees and of main longevity in the world.

Big part of the park closes during the winter because of the strong snowfalls, however, the valley of Yosemite remains opened during all the year.

The Band Butterfly, near of Wawona, in the gone in south to the National Park Yosemita, contains glorious trees of the variety Giant Sequoias. It is worthwhile to come round to see these trees of 300 feet (100 metres) of high and 30 feet (19 m) of diameter.

The Route Happen Tioga is empinada and his route goes first with direction north and afterwards eastwards of the valley. It will carry it until a beautiful alpine meadow with panoramic sights of the valley and of the mountains of the surroundings. On this route, the service of parks has two hotels of style rústico or "lodge" and several Camps High Sierra.

It is a very good point of start of route for mochileros that want to visit the immense areas of virgin nature of the park. The route eventualmente crosses the Pass Tioga to some 9945 feet (3300 m) of height and carries it until the side this of the mountainous chain Saw Nevada. To the east of the Park Yosemita is the Lake Monkey, with his rare trainings of stone limestone and a village ghost very very conserved called Bodie.

The Pass Tioga and the majority of the routes of big elevation are closed of November to May.

Glacier Point Can surprise it with his vast visual landscape, especially during the put of the sun or when the nights of full moon transform the landscape of granite cake in a magic scene. There is a sight to flight of bird of the Valley of Yosemite from the high of the cliff that falls to beak from 3.200 feet of height. Of the another side of the valley, the Waterfall Yosemite collapses dramatically.

The vast panoramic extension of the High Saw to the north and the east inspires a respect reverencial. There are footpaths that carry from the vicinities of this place until other spectacular panoramic points of the valley.

In summer can drive until Glacier Point to a distance of 32 miles (an hour) of the Valley of Yosemite. In winter, the route closes in the area of ski of Badger Pass and Glacier Point turns into the favourite destination of the skiers of cross- country.

The panoramic route Tioga Road (Route 120) crosses the High Earths of Yosemite. Built like route of miners in 1882-83, was rectificada and modernizada in 1961. It goes through luminous lakes, fragile planicies, domes polishings and beaks majestuosos that does so only 10.000 years were covered by glacial ice. The panoramic stops along the route offer seen impressive. In Tioga Pass, the route crosses the crest of the Saw Nevada to 3.031 metres of height, what turns it into the step of cars higher of California. It is closed from ends of autumn until mediated of spring or more.

Tuolumne Meadows (2.600 metres/ 55 miles/ 89 kilometres of the Valley of Yosemite, 1 hour and average in car) is the subalpine meadow bigger of the Saw Nevada. In summer, there is a Centre of Visitors, places for camping, accommodation, services of food and load of fuel. This zone, starting point predilecto for mochileros and diurnal treks, is spectacular in summer, when they abound the flowers and wild fauna in the meadows. The traffic on foot damages easily the fragile meadows of Yosemite and is vedado in them the access to bicycles, prams of baby and vehicles. The excursions to the high earths can be gratificantes, although to these heights of between 2.000 and 4.000 metres the exhausting exercise can put to proof until to the most resistant visitors.