For the traveller, penetrate in the Country Dogón is adentrarse in a world of tale and his Fails of Bandiagara is simply indescriptible. 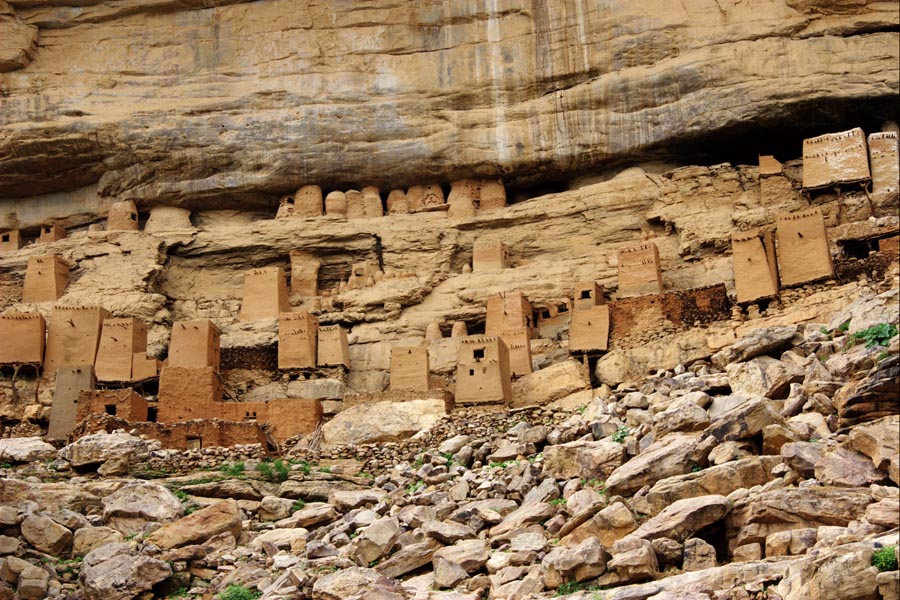 It treats of a village that establishes around fails it of Bandiagara, a geological accident that communicates the south savannah of Mali with the one of the north of Burkina Faso.

In a relatively reduced space these people that base his life in the agricultural cycles remained strangers for Occident until very gone in the 20th century, in that the French anthropologist Marcel Griaule established in Sangha to study them. The scientist remained a lot of years between them, until it arrived to desenmarañar, partly, his complex cosmovision, that does practically unintelligible to the rest of the mortal.

For the traveller, penetrate in the Country Dogón is adentrarse in a world of tale. Some people that follows without electrical light neither roads, that keeps moved away of the world thanks to the inaccessibility of his populated.

That at all it wants to know of new forms of life, and that shows raincoat to the arrival of the main part of the goods of the capitalist society. That anybody expect a cold beer or a party of football broadcast by the television in the Country Dogón. The sun and the moon follow marking the rhythm of the times.

The majority of tourists have a brief contact with the culture dogón. They attend to Sangha, the city that does the times of capital and, the bravest, dare to descend the big stair of stone to approach to Banani. I recommend encarecidamente to the one who do not have fear to the austerity that have a week to go down to the foot of fails it and go visiting the pueblitos with all tranquility.

The fisonomía architectural dogón already deserves the effort. They are villages built entirely in mud, and the granaries have a conical roof of straw. In the complicated simbología dogón, there is silos masculine and feminine, and the populations are had so that, seen from the sky, asemejan a human figure.

In the walls escarpadas of fails it lodge to the deceased, and in the cavities can find some of the places tabú, already was because they inhabit it malignant spirits or because in her realise sacrifices ceremoniales, rituals of circumcision or others and also the houses of the hogones.

These characters are the spiritual leaders of the dogones, live separated of the daily life and are fed regularly by the people that go up to demand them council or that sanction one of the decisions taken by the elderly.

The old gather in the toguná or house of the word, a construction with wooden pillars and seven layers of vegetal roof, that also correspond with a magic symbolism.

Regarding the daily life, the dogón cultivate basically onions and millet, and his life depends entirely that the harvests are good. With the achieved, will trade in the markets of Sangha, Kani-Kombolé or Bandiagara to obtain other necessary things.

A route by the Country Dogón has to take into account that the distances between villages are short, but that the very high temperatures prevent to walk more than a pair of hours to the day. During the moments of maximum insolación is easy to approach to the 50º C, by what the walks have to be realised to first hours of the morning and with mesura. Always it is necessary to detain and give by finalised the day before the eleven of the morning.

To lodge in the villages dogón it is necessary to have the consent of the local boss, that will designate where can establish a camp of foreigners.

Usually it has to resort to a few porteadores for trajinar the team and a local guide that can speak with the authorities, show us the places authorised and, this is very important, avoid the zones forbidden. Some tourists that have broken the restrictions have seen in aprietos very serious.

The food is, invariably, millet or rice with chicken in sauce of peanut. It will help to carry a few things enlatadas, but, generally, some women designated by the boss will cook for the visitors, paying them quantities of money very modest.

To the Country Dogón, like place loved that it is, does not be missing him of at all: the baobabs that, being saint can not be talados but if despellejados to take advantage of his skin in shape of ropes; the holy lake of the crocodiles; the waterfall of Tireli, that allows a bathroom refrescante to the foreigners; and, if there is luck and coincides with a night of full moon, the fights between rival villages, that have sportive character and celebrate between youngsters and adults, once a month, coinciding with this phase of the terrestrial satellite.


1. It fails of Bandiagara

In the heart of the Africa subsahariana, in the extreme suroccidental of Mali, a rugged cliff of 200 kilometres of long raises insolent in the sedienta planicie of the sahel. It is it fails it of Bandiagara, where lives an enigmatic village that has known to keep almost intact his culture during five centuries: the Dogón. And all thanks to the isolation that has imposed to these earths the hard Nature and that now forces to the traveller to throw the foot to the soil and walk.

The starting point is the village of Bankás, situated to twelve kilometres of fails it. Of this way, the pausada approximation to the vertical wall allows to go guessing little by little in the horizon the walls of season and the roofs of straw of the first populated dogón, Telly, that seems suspended in the air. The entrance in his streets of sand does not break the charm of the far vision, especially because in the doors of many of the humble big houses wooden padlocks draw odd figures. Foxes, crocodiles, grullas, figures antropomorfas… cincelados on the humble wood to represent the enigmatic cosmogony of this etnia of a cultural wealth envidiable.

Again in way, the following village that arises is Kani Kombolé, still in the low part of the cliff. Like the main part of the cores inhabited of the Country Dogón, neither surpasses the 1.000 inhabitants. Again walls of season that mimetizan with the terrain. Again humble works of art in wood in the doors of houses and granaries. Once again, legends had voice pausada that speak of the mystery of gods, of the origin of this etnia and of his ancestors. Enigmas That already in 1931 the French anthropologist Marcel Griaule tried descifrar and that only achieved partly after 25 years of study.

It fails it it offers from here a footpath by which rise to the high of this inhóspito territory. They are two hours of way flanqueado by rocks and waterfalls until arriving to Djiguibombo, where the walls substitute the mud by the stones. In the centre of the village an old baobab gives shadow to the toguna or house of the word, a cabin sustained by rudimentary cariátides wooden that sustentan a thick roof of ramajes. It is the place where the men gather for dirimir his disputes. And little further, a construction shows in his external wall two schematic human figures. It is the house of the women, where they reside during the menstruation or when they try a fertility that the Nature seems to deny them.

From here the way discurre parallel to the edge of fails it of Bandiagara, turned into exceptional oriel of a sahel that down imposes his dictatorship of acacias and footpaths of dust. Women of skin of ébano with cestos in the head cross with his walk cansino. They are several hours until arriving to the following village, Ende, already in the plain. There, a simple construction decorated with geometrical figures painted in red, black and white shows in his walls skulls of rabbits, monkeys and lambs. It is the amma na, the temple where this etnia, under the direction of the hogón, his spiritual boss, realises animal sacrifices for his rites animistas. More mysteries of a village that demands like tribute to the traveller that walk if it wants to know it.