The spectacular Norway possesses 30 national parks, being the most important the one of Blåfjella-Skjækerfjella and the one of Rondane. 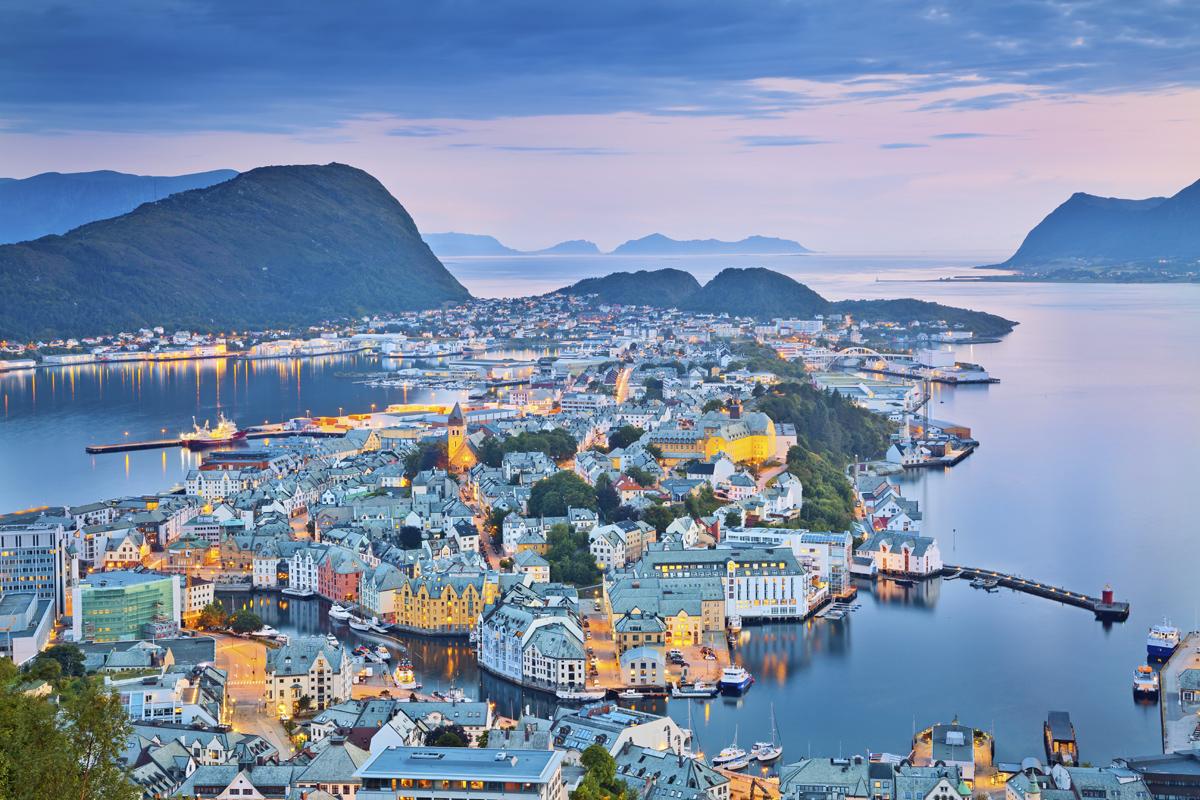 The landscape of Norway is generally rugoso and mountainous, topped by glaciers and his coast of more than 20.000 km (10% longer that the coast of United States) is punzada by accesses in stressed declive known like fiords, as well as a crowd of islands and islotes. It is also known like the earth of the sun of midnight since, because of his location nórdica, part of Norway finds above the arctic circle, where in summer the sun does not put and in winter many of his valleys remain in the darkness by periods prolongados.

Norwegian bordea to the Atlantic Ocean in all the extension of his coast, joined by three distinct seas: the north Sea to the southwest and his big inlet, the Skagerrak south, the Sea of Norway west and the Sea of Barents northeast. The highest point of Norway is the Galdhøpiggen to 2.469 m of height.

The climate of Norway is quite temperate, especially on the coast under influence of the current of the gulf. The climate of the interior can be more severe and to the north can find the conditions more subárticas.

The islands of Svalbard and Jan Mayen are also splits of the territory. The Island of Bouvet in the Atlantic South and the Island of Pedro I in the south of the Pacific Ocean consider dependencies and do not form part of the realm. Norway is one of the countries that demands territory in Antarctica (the Dronning Maud).

Galdhøpiggen Is the highest mountain of Norway and north Europe and is situated in Jotunheimen in the municipality of Lom in the province of Oppland.

Although Galdhøpiggen is the highest mountain of the country, is not the most been bulky, and therefore it thought that other mountains, as for example Snøhetta (2286 m) and Knutholdstinden (2341 m), were higher, before it avenges the modern science with measurements more punctilious. There is a cabin of stone in the beak of Galdhøpiggen. The cabin of today finds like third in the row.

The most usual routes to the beak go of Spiterstulen (1104 m) and of Juvasshytta. The that goes up of fast, the last crosses with Styggebreen. The route of Juvasshytta hard roughly three hours up, an hour in the highest tip and near of two hours down. It drive to Juvasshytta in more or less 40 minutes (15 minutes by riksvei 55 and afterwards of 20 to 25 minutes up the sandy road of toll to Juvasshytta).

A fiord is a valley excavated by a glacier that afterwards has been invaded by the sea, leaving salt water. Usually they are narrow and are bordeados by empinadas mountains, that are born under the level of the mar.

They find in places where the glaciation (present or past) has arrived to the level (current) of the mar. form when a glacier arrives to the sea and melts . This leaves to his step a valley, that remains flooded by the sea when withdrawing the ice. They are used to to be long, narrow and of big depth.

The National Park Rondane (Norwegian: Rondane nasjonalpark) is the national park more ancient of Norway. It was created on 21 December 1962 to protect one of the zones of main ecological wealth of the country. The park contains a high number of upper beaks to the 2.000 meters above sea level, being the maximum height the Rondslottet with 2178 meters above sea level. In this zone inhabits an important colony of reindeers.

In 2003 it produced an extension of the park, occupying now a total area of 963 km². Rondane Finds between the comunas Norwegian of Oppland and Hedmark, to the east of Gudbrandsdal, Dovre and Jotunheimen.

The mountainous landscape is divided by marked valleys. The deepest valley is occupied by the lake Rondvatnet, a narrow lake that fills up the empinado space between the hill Storronden-Rondslottet and the hill Smiubelgen. Generally, Rondane does not receive sufficient precipitations as to generate permanent glaciers, although they can find accumulations of snow in the backside of the flat valleys.

The archipelago Svalbard (also called Spitzberg or Spitsberg) is an archipelago situated in the Arctic Glacial ocean, north of the European continent, that forms part of the Realm of Norway. It consists in a group of islands that cover from the 74º to 81º north and of the 10º to the 35º east; they form the most northern part of Norway. Only three of the islands are inhabited: Spitsbergen, Bjørnøalready and Hopen. The populated bigger is Longyearbyen.

The Treaty of Svalbard recognises Norwegian sovereignty on Svalbard and the Record of Svalbard of 1925 does to Svalbard splits of this country.

The islands that form the archipelago cover a surface of 62.050 km². They dominate three big islands: Spitsbergen (39.000 km²), Nordaustlandet (14.600 km²) and Edgeøalready (5.000 km²). Others of importance are: Barentsøalready, Lågøalready, Hopen, Danskøalready, Kvitøalready, Wilhelmøalready.

60% of Svalbard is covered by glaciers and extensions snowfalls. However, the current of the Atlantic north tempers the arctic climate keeping the clean and navigable waters during the main part of the year. Svalbard Situates north of the Arctic Polar Circle and in Longyearbyen, the sun of hard midnight from 20 April until 23 August and the perpetual darkness from 26 October until 15 February.

The islands also serve like zone of child for the "goose" barnacla Branta leucopsis and a big variety of different birds. Four species of mammals inhabit the archipelago: the mouse of field of Svalbard Microtus epiroticus. The arctic Fox, the reindeer of Svalbard (a distinctive subspecies) and the polar bears.

The island of Jan Mayen, part of the Realm of Norway, is a small volcanic island of 373 km² situated in the arctic, partially covered by glaciers and divided in two parts by a narrow isthmus. It finds in the Norwegian sea and marks his limit with the sea of Greenland; north of Iceland between Greenland and Norwegian to 71º N and 8º Or.

Jan Mayen, administratively, is integrated part of Norway. From 1995 it has been administered by the governor (fylkesmann) of the county (fylker) of Nordland, nevertheless, part of the authority has been delegated to a commander of station of the Norwegian Service of Communication of Defence.

The island is inhabited by personnel that operates a base of navigation of high scope (Loran-C) with a total of 14 employees and a station of climatological services with personnel of 4. The members of the personnel of both live in the centre of accommodation of the base of Loran-C called Olonkinbyen (City of Olonkin).

The island does not have native or aboriginal inhabitants but has assigned him the ISO 3166-1 code of the Country SJ, the command of internet of higher level (ccTLD) is .No (.sj Is assigned but does not use ) and the code of data is JN. The prefix of radius is JX.

The island is mountainous because of his volcanic origin and his higher beak is the volcano Beerenberg (2.277 m) north of the island.

This island does not possess natural resources explotables. His economic activity limits to cater services to the employees of the stations of radius and meteorological Norwegians situated in the island. It has an aerial track without pavimentar of roughly 1,585 m of long designated Airport of Jan Mayen, and; his 124,1 kilometres of coast lack ports or docks, having only ancladeras out of the coast.

The islands Lofoten are an archipelago and a district of Norway, situated in the county of Nordland, above the arctic polar Circle.

The islands Lofoten characterise by his mountains and beaks, isletas to the coat of the the open waters of the ocean, beaches and big virgin areas. To the equal that almost all the Norwegian coast, his geography finds deeply recortada by fiords. The main mountain of Lofoten is Higravstinden (1161 m) in Austvågøand; the national Park of Møysalen2 northeast of Lofoten has mountains that achieve the 1262 m. The system of tides Moskstraumen or system of tides of Maelstrom finds to the east of the archipelago. The sea is rich in life, and the main coral reef in deep waters (Reef of Røst, of 40 km of length) finds west of Røst. There is a high density of population of marine eagles of white tail and cormoranes, and million other marine birds, between them the coloristas frailecillos atlantic. They are common the otters, and there is heave in Austvågøand.