Considered like one of the natural wonders of the world is situated inside the Natural Park of the Big Cannon, U.S.. 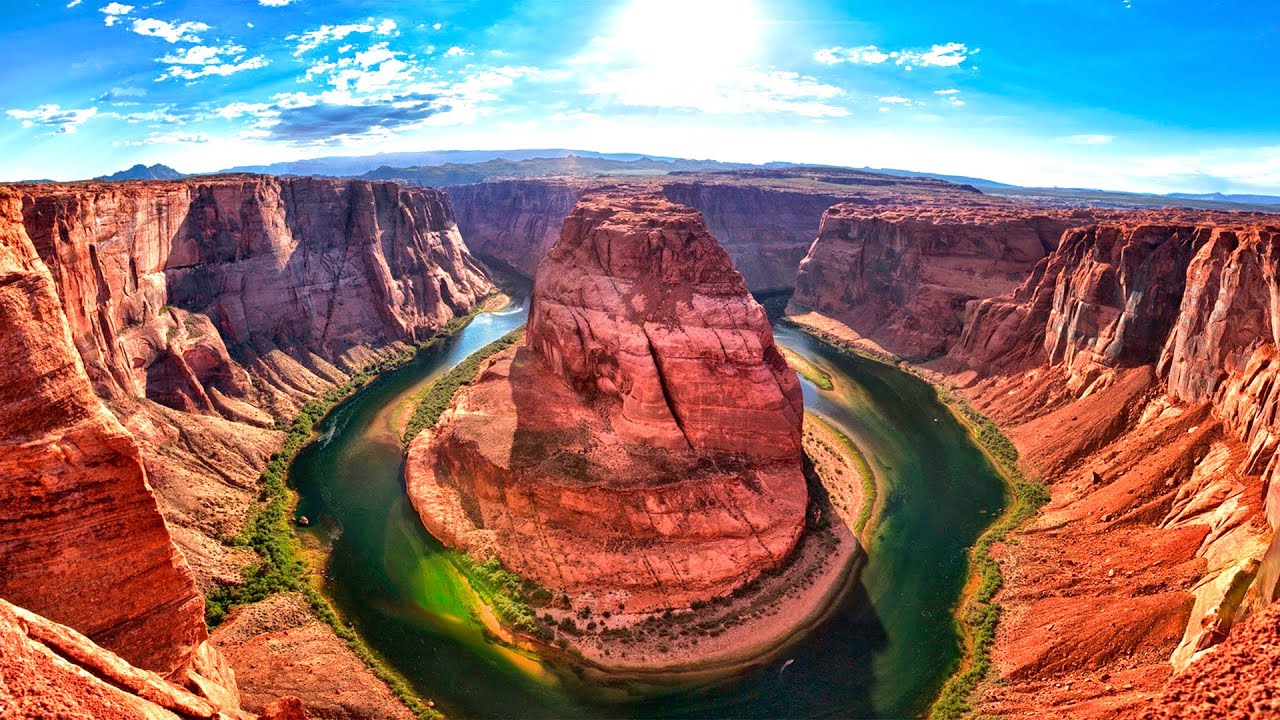 The Big Cañon (the Grand Canyon) is a showy and escarpada throat excavated by the river Dyed in the north of Arizona, United States. The Cannon is considered like one of the natural wonders of the world and is situated in his main part inside the National Park of the Big Cannon (one of the first Natural Parks of the United States). The president Theodore Roosevelt was the main promoter of the area of the Big Cannon, visiting it in numerous occasions to hunt cougars or to enjoy of the impressive landscape.

The cannon was created by the river Dyed, whose course undermined the terrain during million years. It has some 446 km of length, has mountain ranges of between 6 to 29 km of width and achieves depths of more than 1.600 m. Near of 2.000 million years of the history of the Earth have remained exposed while the river Dyed and his tributarios or tributaries cut layer after layer of sediment at the same time that the plateau of the Colorado elevated .

Apart from the occasional tourist visit to the embroider south with his 2.134 metres on the level of the sea, the rafting or descent of rivers and the walking are activities especially popular. The bottom of the valley is accessible walking, in mule or in boat descending from the top of the river. The civil servants of the park do not advise to realise in an alone day the excursion to descend to the course of the river and go back to go up because of the distance, the effort required and the danger of heat exhaustion by the high temperatures that achieve deep down. Even the excursions by the edge have to do with care in some points; with frequency there are signals of danger along the tracks that visit the edges of the cannon.

They exist companies that organise descents in rafting of the river, generally in boats for 15 people instrumented with engine fueraborda, are used to to split of Lee’s Ferry and arrive until Diamond Creek lasting the trip some 6 days. The boats instrumented only with oars are used to to take some 2 weeks in completing the trip. Also they exist companies that organise excursions for tourists in helicopter to the Big Cannon.

One of the most recommended activities for those who visit the Big Cannon of the Colorado is to descend from any of his edges until the inferior valley. Of between the multiple footpaths prepared so that the visitors can realise this walk, the most popular is the Bright Angel, whose point of start finds beside the Bright Angel Lodge.

Descending the 12 kilometres and half of length of this footpath, the tourist up to the Phantom Ranch ("Ranch Ghost"), only hostel situated beside the river. There it can lodge and realise treks, cabalgatas or rafting. For this, the most convenient is that it effect the reservation with antelación, because the demand is a lot of and is almost impossible to achieve accommodation in the moment.

Some people opt for visiting only the half of the footpath, arriving until Plateau Point (415 metres on the level of the river), for afterwards return. This walk (gone and turn) insume around six hours and results more bearable. In this first stretch of the footpath finds Indian Gardens, an area of rest that has tables and services.

If you think to visit the Footpath Bright Angel or any another footpath of the Big Cannon, do not leave to consult in the places of information: which quantity of water that have to carry, if you will find centres of procurement on the way, the time that you insumirá the route that think to realise and the best hour to do it (the sun is used to to be very strong to determinate hours).

2. Walks in Aeroplane and Helicopter

The Big Cannon is a true deleite for the eyes. The sights that can have of him are almost infinite, varying according to the location of the observer and the one of the sun (to measure that changes the angle of fall of his rays change the tonalities of the distinct layers sedimentarias).

Generally, the visitors limit to contemplate the Big Cannon from one of his edges (particularly from the edge south). Others, more fearless, do the effort to descend on foot to the inferior valley, accessing in this way to other seen.

But, to contemplate this natural wonder no already from his upper edge or from his inferior valley, but from the air, is necessary to resort to an aeroplane or to a helicopter. And this is possible. The local companies of tourism receptivo are prepared to offer this service with units of high technology.

From the Big airport Cannon, situated to few kilometres of the Centre for Visitors of the Extreme South, split aeroplanes and helicopters that carry to the tourists to contemplate from the sky this imponente natural phenomenon.

3. Centre for Visitors of the Extreme South

The extreme south of the Big Cannon is the place more concurrido by the thousands of tourists that, from all parts of the world, arrive to the Cannon of the Colorado with the end to know in person this true natural wonder.

In him, on the high plateau of the Colorado, to no a lot of distance of the location of Tusayán, finds the Centre for Visitors of the Extreme South. By this Centre happen the ninety percent of the people that arrive to the Big Cannon.

The sights that have of the Big Cannon from the extreme south are the sufficiently imponentes as so that the big majority of the visitors limit to contemplate it from here.

From the extreme south can descend on foot until the bottom of the valley or address an aeroplane or a helicopter for sobrevolar this glorious natural wonder.

It is worthwhile to travel until the Big Cannon although more was not to contemplate it from his extreme south. Anyway, if your physical state allows it to you and have of the necessary time, do not lose the opportunity to descend, at least a bit, to the valley. This will allow you no only contemplate the landscape but besides "ingresar" in him.

2 thoughts on “Big Cañon of the Colorado”