Excursion that will allow us discover the lovely places of the zone of the Matarraña, south region of the band of Aragon.

Taking the village of Beceite like starting point, this route will carry us to visit the incomparable landscape that the river Matarranya has forged to his go through the macizo of Els Ports. It is a route senderista emblematic no only of the Ports and of the Matarraña, but also of all the province of Teruel.

The route follows the course of the river Matarraña until arriving to the Narrow  of the Parrizal, a place of big beauty in which the river fits between the high walls of rock limestone, that form a desfiladero so narrow that in some points is almost possible to touch both sides of the river pulling the arms.

The Matarraña is a region with a spectacular cultural heritage: historical groups, Gothic monuments and renacentistas, yacimientos archaeologic; but it would be unfair obviar his natural wealth, especially in the south of the region, where find the Ports, a macizo mountainous that has a big biodiversidad and that it is shared by the province of Castellón and by the Terres of’l Ebre (Tarragona).

Beceite With little but of 500 inhabitants (in 2019) this situated in what it knows like the Band. Beceite Or Beseit is one of the 62 municipalities catalonófonos of Aragon. By the municipal term of Beceite discurren the rivers Matarraña, Ulldemó and Algars, beside forests and saws that conform mountainous landscape of big beauty and espectacularidad that house one of the most varied ecosystems and better conserved of Europe. This village conserves a big charm, contributed by his narrow and serpenteantes streets, his portals, calizos and the golden of the stone, that keeps on being the protagonist of the majority of his edificaciones.

The distance in car will initiate it from Beceite, following the indications of “Parrissal” will go crossing the population to take the rural way (asphalted but narrow) that will direct us to the natural place, happening previously by the Checkpoint, where will have to show the ticket of the parking.

The tickets of the parking can compare directly through Internet: https://entradasbeceite.arteyocio.com/ruta-del-parrizal-parrissal/

Once we have left the vehicle in the last parking (Parking nº3), to some 6 kilometres of Beceite, will follow during 800 m. The way without asphalting that it finds just across a chain that prevents the step of vehicles. Along this walk will go visiting the rupestrian paintings of the Fenellassa and a small botanic route.

The rupestrian paintings of the Fenellassa are the most representative of his style in the region of the Matarraña and beside eight yacimientos more complete the group of rupestrian art of the territory. They have conserved 8 figures: 4 riders that ride of foot on 4 cuadrúpedos.

After these 800 metres of Walk, will visualise a wooden runway indicating us that from this point begins the Route of the Parrissal. From here and during roughly an hour will go tracing back the river Matarraña (well by footpaths or going through some wooden runways) until arriving to the full stop of the route, designated Els Estrets of the Parrissal: cannon of 60 m of high, 1.5 m of width (in his part but narrow) and 200 m of long.

This stretch of throat is transitable only in the period estival, period in which it is dry or with little water and allows us cross the narrow. The rest of the year will remain us to the entrance of the narrow. Once arrived to this point, will go back by where have come. 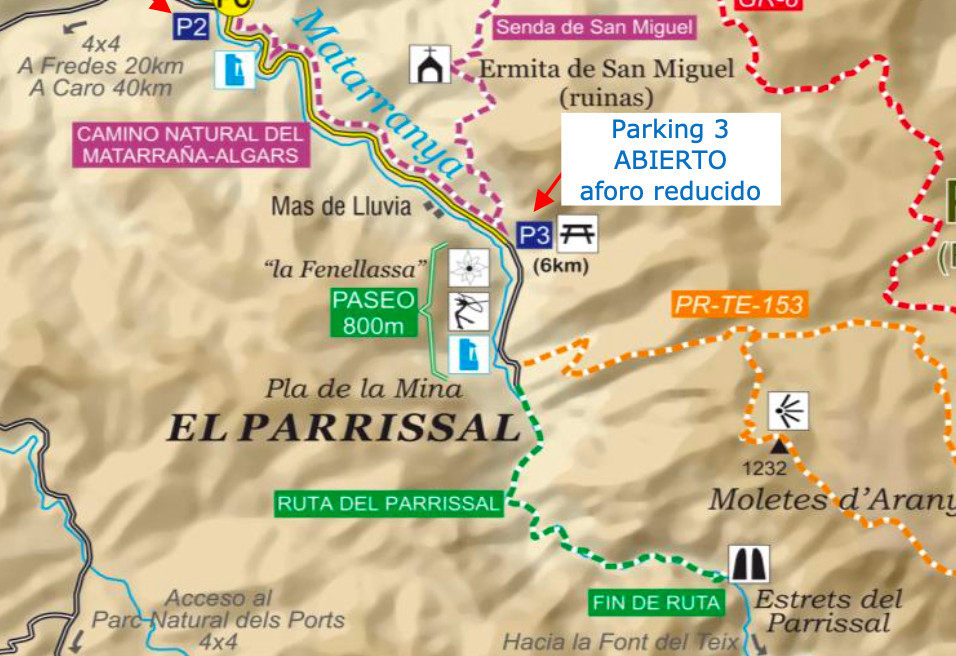 It DOWNLOADS the brochure of excursions of Beceite