Brief itinerary that allows us enjoy of a very complete sample of the Park dels Aiguamolls of the Empordà.

The Natural Park of the Aiguamolls of the Empordà is one of the natural zones more known and emblematic of Catalonia, since his creation, year 1983, was consequence of an intense and long campaign of defence initiated in 1976 to stop a project of urbanisation that pretended to build a marine residential for 60.000 people in the system lagunar situated between the mouths of the rivers Muga and Fluvià.

The pantanales empordaneses occupied, in the past, almost all the plain of the bay of Roses and of the low Ter. To be able to us do an idea, the macizo of the Montgrí found isolated by the waters, and the Greeks founded Empúries in an island between the ancient mouths of the rivers Fluvià and Ter.

That extensive area of pantanales was disappearing owing to the desiccation by aprovechamientos agricultural and graziers to avoid the paludismo, and from the years 60, owing to the speculation urbanística. If during the year 1976 had not initiated the campaign of defence, at present would not remain any trace of this humid zone.

The year 1983, the Parliament of Catalonia approved by unanimity the Law of protection of the Aiguamolls of the Alt Empordà. The ones of the Baix Empordà, that is to say, the zone of the low Ter and of Pals, remained out of the Law but finally have remained included inside the Plan of Spaces of Natural Interest (PEIN) and expects that in the long run they turn into natural reservations.


1. Aiguamolls Of the Empordà

To arrive to to the caseta of the Natural park have to go by the AP-7 direction France and go out in Figueres. Of there follow the indicators to Roses and Sant Pere Fisherman. You will find the detours indicated to Empuriabrava and to the park after happening several roundabouts.

Inside the Natural Park of the Aiguamolls of the Empordà find a series of footpaths very signposted with numerous points of interest.

Itinerary 1: from The Cortalet until The but of the Kill East is a brief but intense itinerary, that allows to enjoy of a very complete sample, accessible and amena of good part of the habitats and the most emblematic species of the Park. Although it treats of a short route, the numerous observatories allow to lengthen the sight and observe the big variety of birds that find shelter in the zone during all the year. Ida and turn by the same way. Of The Cortalet to The but of the Kill there is 2,5 km (GR92).

Itinerary 4: of The Cortalet to the Lakes Europe. This itinerary links two humid spaces created by the Natural Park and at the same time connects The Cortalet with Empuriabrava. It crosses a piece of the nude agricultural plain of shadows, and do it on foot can be tiring if it does heat, but is interesting all the year. The last stretch of the route bordea the Lakes Europe, of artificial origin and that collect the clean waters of the station debugger of residual waters (EDAR), and the itinerary finishes on the wooden bridge for pedestrians that find on the river Muga, where can appreciate very well the forest of bank. Ida and turn by the same way or linking with the Route of the Lakes. Of The Cortalet to the Lakes Europe there is 4 km.

Itinerary 5: This itinerary is situated in the left margin of the rio Fluvià, to 1,5 km of his mouth, in the municipality of Sant Pere Fisherman. It was purchased by the Social Work Catlunyacaixa in the year 1999 and has an approximate extension of 10 has. The interest of this itinerary recae in the pasture of cut, that has a big diversity florística, including several species of orchids and an important fauna associated. The forest of bank appears in a narrow band near of the rio, in which little by little it is recolonizando an ancient population of poplars and plataneros and constitutes a glorious zone of breeds of birds like the oriol or the real whistle. 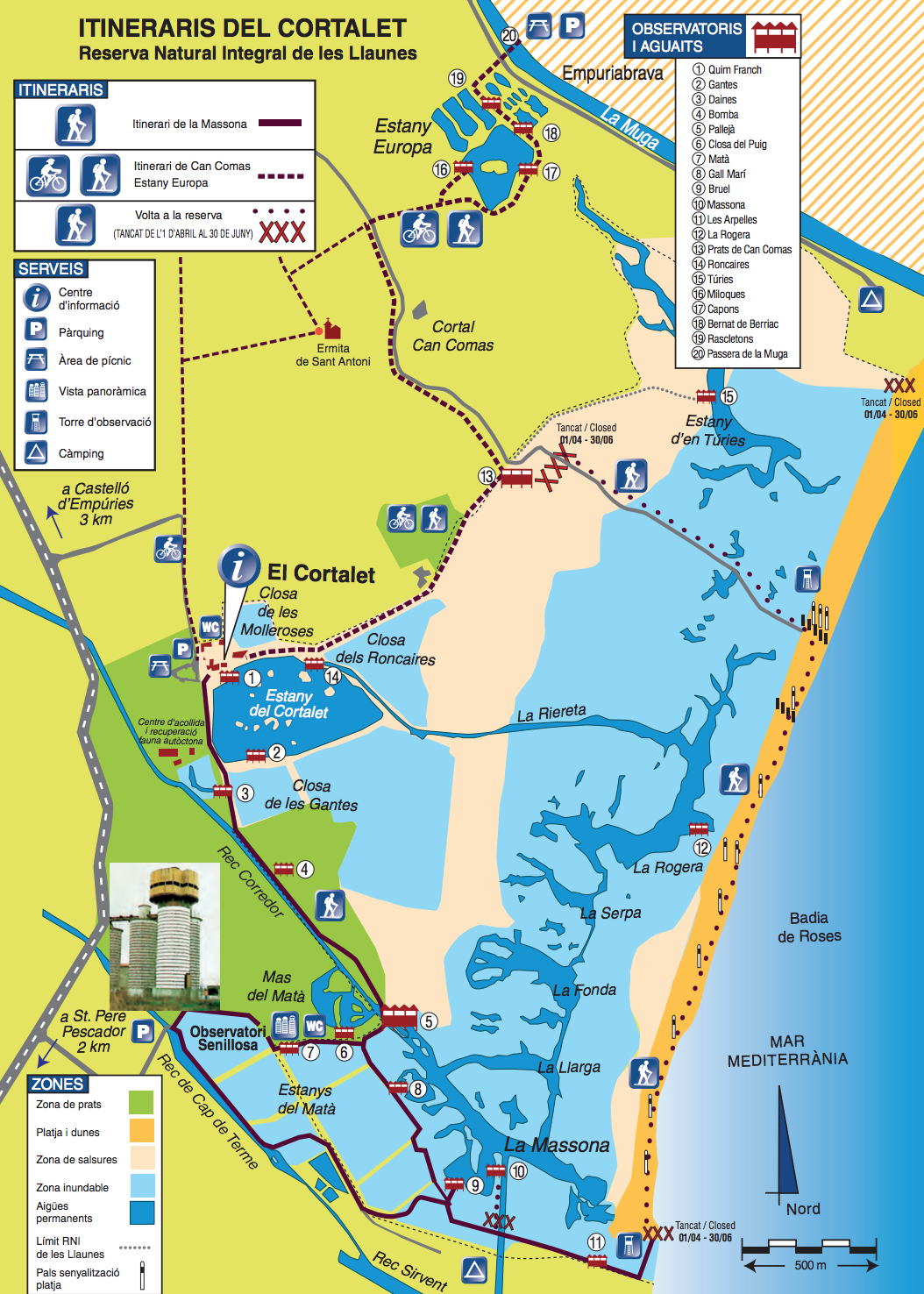