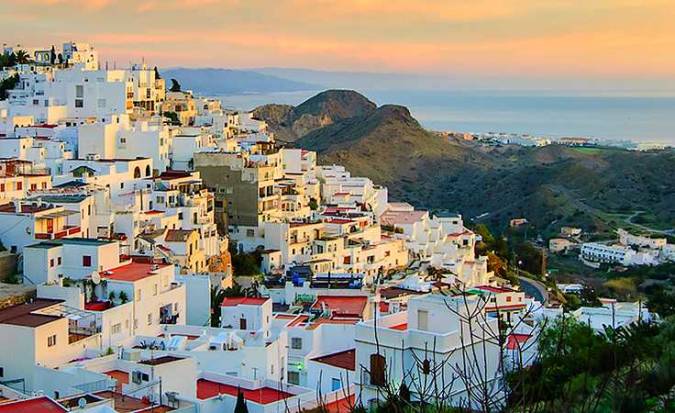 We leave you a series of routes by the surroundings of Mojacar; very beautiful population of the coast of Almería.

Splitting from Mojácar beach direction to Carboneras, leaving to our step the indication of Castle of Macenas, and happened the field of golf, continue by the road that drives us to the district of The Sopalmo, small and picturesque pedanía of Mojácar. There we will observe manually left beside a small bar, a poster that indicates us the beginning of the route. This will be our starting point.

The descent of this route, initiates in a rampa of concrete of some 100 metres that facilitates us the direct entrance in the itinerary, natural descent of the own rambla. The courts of the terrain present very beautiful colours in diverse ranges that go from the grey to the brown, going through the purple tones. The way begins with an altitude on the level of the sea of some 190 metres and follow the distance of the course, that carries us directly to his mouth in the mar. Here the Rambla Granatilla presents wild and full of volcanic rocks that cooled to the contact with the mar. The return effects with the same route to the reverse.

In days of rain, recommends not realising this route.

2. Route by the Rambla of the Muslim

The route passes from Sopalmo, in the ALP-118, until the homestead of the Muslim going up by the rambla of the same name. It corresponds with a short stretch of a much longer route, the Transcabrera, that comes from of the cortijadas of The Carrasca, The Moralicos, Cufría and The Rosebay crossing Saw Cabrera. Already in the estribaciones of this saw the rambla opens us step to the mar.

Region : region of Raise Almeriense
Initial municipality : Turre
Time of route (gone and turn) : 1.- Car 120 ; (minutes)
Typology : Half mountain
Length : 20500 metres
Recommendations : Realise in car. Although the road is very narrow, can stop in each POI without entorpecer the traffic.

In the Road To THE-150, to some 700 m of the bridge Cowboy felt Turre, will find us with the entrance of our route. Sierra Cabrera elevates to next heights to the 900 m. On the level of the mar. In her can find populated Hispanic-Muslim, abandoned by his moradores a night of 1569, in that the moriscos that there lived crossed the Saw and escaped to Africa, taking a boat in a cala of Mojácar. In the route will go through Big Homestead, where are the installations of the Field of Golf, to continue rising to Sierra Cabrera where will be able to find masses of encinares and only pinewoods in the seaboard almeriense, so much by his extension as by his diversity; in the transitar by the zone can us topar with the falcon pilgrim , real eagle and perdicera, real sty, lechuza, mochuelo, currucas, as well as with the star of the Saw, the turtle Muslim, a species loomed and protected. If we follow adentrándonos will surprise us his rincones, by his natural beauty and his cortijadas like Cufría, The Moralicos, The Carrasca, Royo Morera and his natural places like The Dondo, Hill of the Mosque, Mofar. His archaeologic rests like Gátar, Teresa, Cabrera and the Torreón of Sierra Cabrera will do of this route an unforgettable day.

4. Route of the Mills of the Rio Waters

In the beginning of our march, will situate us in the municipal term of The Gallardos, in a Mediterranean region of singular beauty in which the main leading is the river Water.

Along his route are to stand out his geographic conditionings and physicists, that together with the nature of the soil and the strong erosion determined the fisonomía of this landscape. We can aim like curiosity some autochthonous species that allow a vegetal coverage limitadora of the erosion and the aridez.

His climate semiárido with an annual half precipitation of 200 to 350 mm, allows us observe a beautiful and extraordinary contrast with clear connotations subtropicales.

His current vegetation is constituted mainly by tomillar, espartal and thicket, no descartándose the possibility of some endemisms inside this zone.

After taking contact with the nature of these surroundings, along the transcurso of the river. It is to stand out the important presence that have and that will constitute the itinerary of our route by the river: the Mills. They demand a high on the way, as his presence is the footprint that left his pobladores after the research and the aprovechamiento of the water.

These resources hídricos used for diverse ends: Regadío in the agriculture. Bathrooms like therapeutic use and like strength motriz in the hydraulic Mills.

It fits to stand out any of these mills that through the course of the river can find us: “The mill of the Cave”, situated before Bridge Cowboy. Architectural heritage of Artistic Historical Interest, presumably of Arab period and practically built in his whole of cantería with get ready of sillería.

Continuing downstream find us with “the Mill of the Higuera”. Situated before bridge cowboy. In front of him in the another margin of the river there is a small manantial.

The following mill that will find in our march is “the New Mill”, in state of conservation very precarious, since practically it is in ruins. Although they can appreciate details of his construction and with all the necessary infrastructure to study and know the technology and technical of these mills.

Another form of aprovechamiento of the water were “The Bathrooms”. A spa situated in the district of Alfaix. Beside the mulch of the river, to the that arrived people of all the province and out of her. Looking for rest and therapeutic properties of these waters. Muds and slimes. Nowadays even they can see rests of these complexes.

Continuing the river can approach to Cadimar, roman core, also considered like urbes, although rather it treats of a group of villas in which still they can find rests of ceramic used by his pobladores that even coined his own coin.

5. Route Walk of the Marine – Cave of the Wolf

Going down of Mojácar direction to the Beach by the sidewalk of the right, happen the Centre of Multiple Uses that remains us to the left. But forward we will find a way to the right from begin ours route. Following this way asphalted, go observing while we walk or stroll in bicycle, the distinct samples of our wealth in the distinct plants and autochthonous flowers of the zone, as well as the distinct tonalities of the earth, that shows us the places by which go happening. Satisfied go realising this descent, by which direct us until the bank of the sea, find us with some enclosed curves, of which it is necessary to have precaución, since by this way are used to to happen cars. This route comes us to give to the zone of the beach known like Cave of the Wolf, from which, can see and enjoy of our extraordinary beaches. The route of turn, can realise by the same way by which have come or by all the bank of the beach.

6. Route of Sopalmo to The Rosebay

We take the road of Mojácar Beach in direction to Carboneras. We continue by here until arriving to the district of Sopalmo, where can park the car. Manually right, will take the way that in a principle is asphalted and that discurre between the homesteads. We follow the route that already return of earth until arriving to the Place called The Mayoral. We rise some kilometres finding us to some 408 metres of altitude. We follow the way until the place designated the Rope of Coscojar. We are to an altitude of 600 metres, and go through the Mine of The Pigeon. Here we can do a high in our route to re-create us in the wonderful seen and take strengths to follow our promotion that carries us to the Hill of the Mine. A bit more advance we will find us with the Rambla of The Rosebay and next some metres further up, to an altitude of some 742 metres, arrive to our destination, the Hill of Adelfa. Of turn, by the same way, will enjoy of the landscape and the seen.

And if you wish to happen some days in this wonderful population while you enjoy of his nature, in Mojacar will be able to find all type of hotels in Mojacar, from hostales very affordable until lujosos hotels.