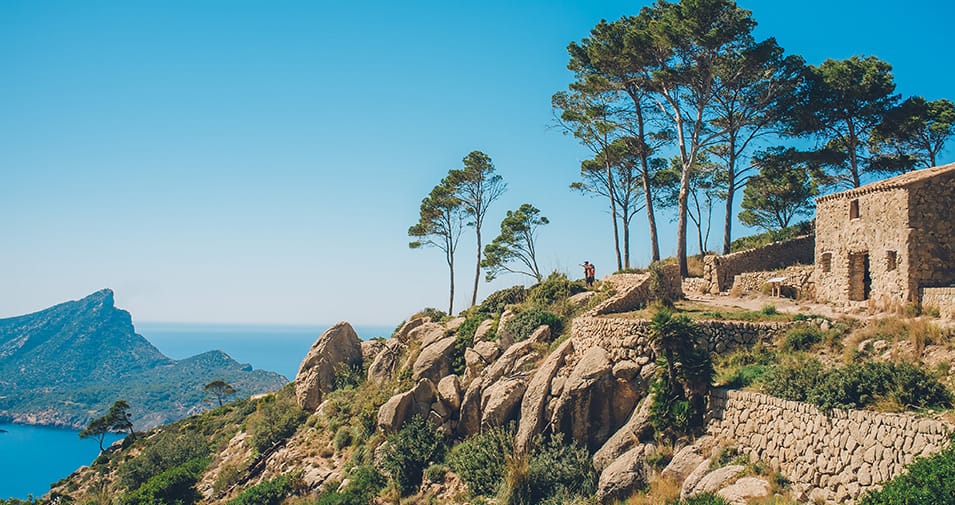 The Route of Pedra in Sec or the GR-221 is a footpath of big route that naughty the Serra of Tramuntana of Mallorca of tip to tip.

It calls Route of Pedra in Sec because of the big quantity of constructions done with the method of construction of dry wall that can find in his way: margins, mines, walls, barracks, fridges, etc.

It has roughly some 283 km and takes advantage of, in the main part, the ancient ways that discurren very near of the highest beaks of the Saw of Tramuntana of Mallorca, that in numerous cases surpass the 1000 metres of altitude.

When it was finalised in your whole, this route by the saw of Mallorca, will join the villages of Andratx with Pollença in 8 and will allow to cross the saw of Tramuntana of west to east. In each stage will have of a shelter that will be able to serve of point of accommodation, but also will be able to take advantage of the cores of population by where raisin or by where approaches the route like points of avituallamiento and for pernoctar.

The stages will cross landscapes very differentiated: coastal zones, little or at all inhabited, villages and aldeas; agricultural zones; forests; thickets and the highest peaks. All they with an important presence of the constructions of Pedra in Sec, in shape of walls of closing, bancales, ways, etc.

Good part of the shelters will situate in places that can consider natural oriels and, at the same time, all will find associated to importantísimos elements patrimoniales of the Serra of Tramuntana, so much of ethnological character, as natural, artistic, historical or cultural.

The shelters at the end of each stage, ordered from Andratx to Pollença are:

The itinerary that propose you here consists of five stages. The only  five stages enabled in 2010, the rest still under construction. From Valldemossa to Pollença:

The stages have the following distances and throw off balance:

You can access to the rest of the information of this route: Pedra in – sec GR 221 – Serra of Tramuntana of Mallorca