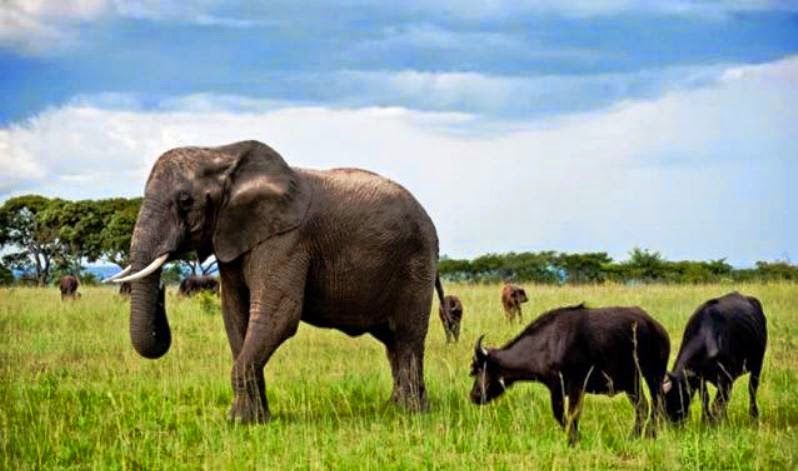 The animal world does not leave to surprise us day after day, and in this occasion has called us a lot the attention a female elephant known like Nzou, which has decided to share his life with the búfalos until the point that in the actuality leads the pack.

The sad history of Nzou

In the actuality, Nzou has 46 years to his backs, and the true is that really it thinks that it is a búfalo, since of all the life has shared all his vivencias and experiences with this another animal species.

This is due to that when Nzou was so only a cachorro, some hunters furtivos finished with his parents and the pack in which it found .

The happy world of Nzou

But no everything is bad in the history of Nzou, since in the actuality finds residing in Zimbabue, inside a reservation for the conservation of the nature that has been designated Imire and that extends along an upper surface to the 10.000 has.

The founder of this reservation, Norman Travers, was the one who found to the solitary animal, and decided to collect it to move it to said reservation and joint it with a male of the same species, which in that moment was the only that lived in the reservation and that to his time related with the búfalos.

The years were happening, and in the actuality can contemplate like Nzou has gone losing considerably the own characteristics of an elephant, and little by little has gone adapting so much to the búfalos, that his behaviour many times does to doubt of if those that are made a mistake are we and in reality have confused us of species.

The attempt for rehabilitating to Nzou

But the association wanted to prevent that this occurred, and thus they tried to enter to Nzou inside a pack that finds also in the reservation at present and that is formed by elephants of his same species, but Nzou already had totally clear that wanted to happen the rest of his life beside the búfalos.

In several occasions realised diverse attempts, but never there was way to separate to Nzou of the búfalos, by what finally desisted and in the actuality allow without problem that keep at the side of them, since it was with these same with which grew, and beyond all doubt has finished identifying completely.

The case is that it has turned into the leader of the pack, what has done also in some way that the búfalos change his behaviour. We do not forget that in the case of the elephants, the packs generally are led by females, whereas in the case of the búfalos, are male those that commission of this menester. By this reason, Nzou has seen wrapped in litigate with other búfalos, of which 14 died.

But the relation of Nzou with the humans also is surprising, since in an occasion, his carer Matthew was attacked by a búfalo, and Nzou interposed to avoid that so much he like the rest of búfalos followed with the attack. Even so they continued attacking, but she defended to the man until they arrived the assistances. The next day it took the decision to crush to the búfalo that had assaulted to Matthew.

As we can see, it treats of a truly surprising history.

﻿A comment in "Nzou, the elephant that feels búfalo"