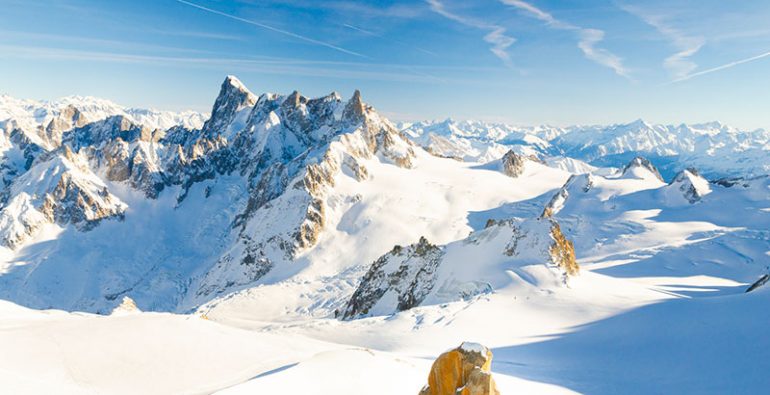 The peak of the Mont Blanc is shared between Italy and France, although they appreciate small differences according to the cartographic sources, since the maps of the National Geographic Institute of France include all the summit inside the own borders, what contrasts with a document of the Archive of State of Turín, as which the peak belongs entirely to Italy.

After a bilateral agreement signed in 1860, the treaty of Turín, in which it yielded Saboya to France, the peak of the Mont Blanc divided between the two states, following the divisional line of the waters. Beside the treaty joined a quite imprecise map, but that showed clearly that the peak was shared.

However, in 1865 a cartógrafo of the French army, the captain Jean-Joseph Mieulet, published in his country a topographical map that attributed the peak of the Mont Blanc entirely to France, originating in this way the cartographic differences.

The Italian maps, particularly the Atlas Sardo of 1869, show the map as in the treaty. To his time exists an administrative order French of 21 September 1946 in which it divides the sector of Dôme du Goûter and of the Mont Blanc between the comunas of Saint-Gervais-them-Bains, Them Houches and Chamonix-Mont-Blanc. This order delivers the summit between the municipalities of Chamonix and of Saint-Gervais-them-Bains.

From 1988, a frank mixed commission-Italian began to gather to try define the border. In 1995, the Italian authorities sent a report to the French to show his position in the subject and ascertain that these difficulties surpassed the field of competition of the commission, suggesting that the question had to be examined by the ministries of Foreign Affairs of both countries.

This same year, the ambassador Antonio Napolitano, boss of the Italian delegation, claimed for his country the property of the peak, as they had done previously cartógrafos French and Swiss. The French Ministry answered, a year later, that the topographical maps of the treaty of 1860 were destroyed during the German occupation.

In 1999, the Italian government envíó a copy of the Convention of Delimitation between the Realm of Cerdeña and the French Empire of 1861, whereas France contributed a photographic copy of said document; both countries engaged to adapt his official cartography to the traced by the quoted document, and the subsecretario of Foreign Affairs Italian Umberto Ranieri affirmed that, although the problem follows without resolving , «the aim is not another that delimit jointly, in a spirit of friendship and collaboration, the traced border between both countries. Only on the base of said spirit of bilateral collaboration will be able to put end to a cartographic anomaly that lasts already more than a century».

At present the question seems to generate still some controversy, especially in the Italian side, from where affirms that the map of Mieulet -origin of the traditional dispute- lacks juridical value any.