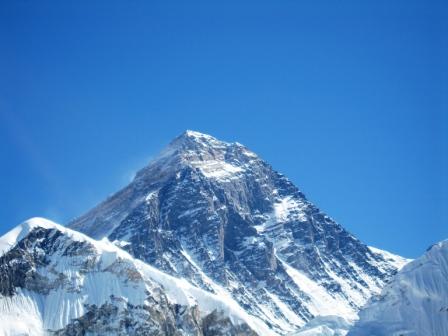 The Himalaya extends by Bután, China, Nepal, India, Tíbet and Pakistan, forming an arch of 2.600 kilometres of west to east and of 350 of north to south. His name proceeds of the sánscrito and his meaning is purple of the snow.
It is the highest mountain range of the Earth, with fourteen peaks of more than 8000 metres of height, being the Everest, with his 8.848 meters above sea level, the highest mountain of the planet. Other ochomiles, like the K2 (8.611 m) and Kanchenjunga (8.598 m), are also in the Himalaya.

In his valleys exist numerous ways that adentran in the deepest of the mountain range, between which stand out the Valley of the Khumbu – Kalla Pattar, the way of Ladakh – Lamayuru to Chiling, the route to the Sanctuary of the Annapurnas and the footpath of the Valley of Lantang and Lake of Gosaikund.
In 1953, two members of a British expedition led by sir John Hunt were, during 15 minutes, seeing the horizon from the highest point of the planet, the peak of the Mountain Everest.

Edmund Hillary and Tenzing Norgay went in in this moment in the history when being the first in opening a way that, since, have repeated the more than 6.200 mountaineers that have achieved the summit of the Everest and the more than two hundred that have left his life there.

But they were not alone. Between the companions of the expedition found the journalist of the newspaper TheTimes , James Humphrey Morris, known worldwide like Jan Morris after changing of sex.
Since Jan had news of the coronation in the camp, in a period in that the communications were not so simple neither fast as now, began his personal challenge to attain that the newspaper for which worked was the first in speaking of the conquest. And no only it attained it, but it coincided with the coronation of the queen Elizabeth II, what produced a furor patriotic that allowed him launch his career and turn into a writer and journalist of big success.

Jan Morris related his adventure in the novel The coronation of the Everest, published in 1958. Recently, the publishing Rooster Nero has published a new edition of the exciting history with a very taken care translation.
Besides, the edition has the prologue of the journalist, writer and lover of the mountain Sebastián Álvaro. Known by the big public for being at the top during more than two decades of the television program To the edge of the impossible, Álvaro has published several books and worked like journalist in diverse means.

From the look of the that expects, The coronation of the Everest transports us to a moment historical for the passionate of the mountain.