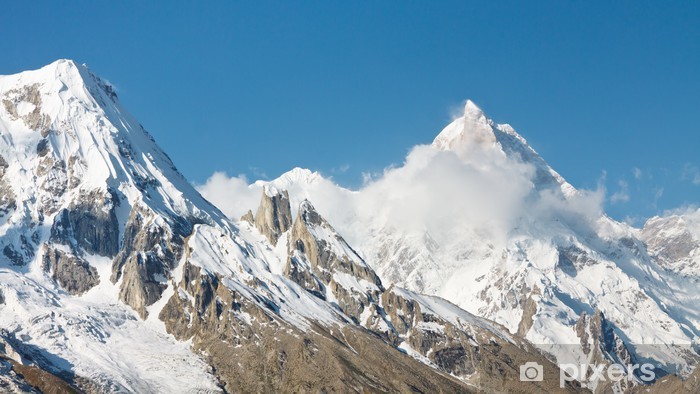 The Italian Hervé Barmasse, together with a team of climbers, has completed successfully the three first promotions and a first descent in esquís during the month of July of 2012, in the Karakorum, Pakistan.

On 22 June 2012, the athlete and leader of the expedition, Hervé Barmasse (ITA) and his team of Italian mountaineers, Daniele Bernasconi and Martin Peterlongo, went to Pakistan to treat to arrive to one of beaks more difficult of the world Baintha Brakk (7,285m), also known like the “Ogre”. The team went back of the region of Pammah Muztagh 48 days after having achieved the three first promotions and a first descent esquiando, in beaks of more than 5500 metres, adding it to his list of impressive successes. Because of the bad time, the team of expedition did not achieve to arrive to the peak of the “Ogre”.

After happening nine day acclimating in the basic field, having done already the first promotion and crossing the beak north (6330m) on 11 July 2012, the team prepared to achieve his initial aim. To measure that approached to the base of the Ogre esquiando, carrying the equipment in sled by an area known like “Snow Lake” (lake of snow), the team vió the face of the mountain and dió account that his dream did not go to be able to be realised. Strong snowfalls in the previous days had left the impossible mountain for scalar.

With only two days of good time between the 12 and on 28 July, 2012, the team tested luck in other two promotions, the first in a line of ice, abandoned after a rise of 200 metres when they had to look for shelter of the snow and granizo, and the second was an ascensión successful with also a descent of ski in the first place, that took place in a beak of 5966m without touching, to the shadow of Ogre, wrapped in clouds.

To measure that the time improved, the team returned again to the feet of Ogre, but found with a metre of snow by what did not have more remedy that go. The first final promotion of the expedition was a beak traicionero of 5850m, a thrilling promotion but that can not substitute the joy of what could have been if they had arrived to the summit of Ogre.

Resumiendo The expedition, Barmasse commented: «Each expedition are some holidays, a trip, an experience of life that gives us a montón of emotions, recuerdos and anecdotes. So, although we did not succeed in Baintha Brakk, the 32 days happened in one of the most unknown places of the Karakorum has been a big opportunity for me. Really I expect that some day this place loved can turn into a destination for a lot of other climbers. «