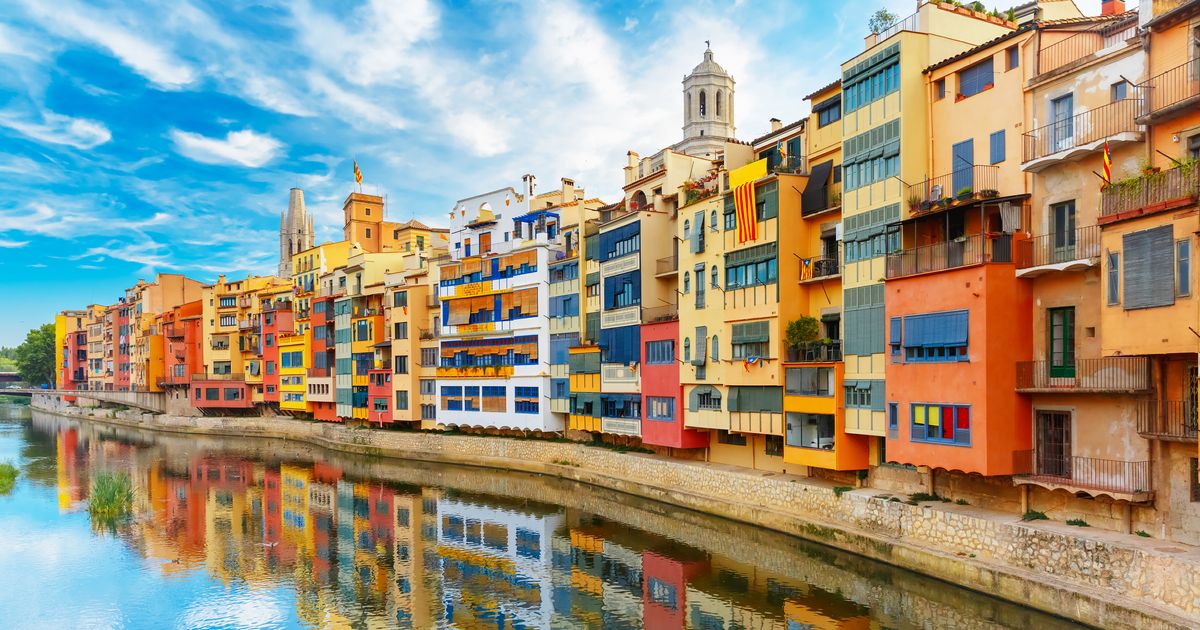 Girona is one of the cities with more personality of Catalonia, with a rich historical past and an admirable monumental group.

It is situated in the valley of the Ter, in the confluencia with the Güell, the Galligants and the Onyar, for this reason has been called the «city of the four rivers».

By his strategic situation like traditional step of the northeast of the Iberian peninsula to the European continent, beside the Road Augusta roman, went municipium roman, headquarters of a bishopric from the s. V and centre of the county that has his name from period carolingia.

Defensive bastion in front of the French invasions, suffered multiple sieges and his resistance in the war against Napoleon (1808-09) turned into legend.

To the right of the river Onyar, that forms the urban axis, heaves the ancient core, in a hill that was walled off –the Força Vella– and extended afterwards by the plain beside the river.

To the izqulerda of the Onyar, the modern Girona extends until the park of the Devesa.

The ancient neighbourhood conserves pieces of wall, that visit the walks Arqueològic and of Them Muralles, and in his interior there are buildings of big interest.

The cathedral is a splendid construction of diverse periods: big bell tower and claustro romance; the only ship, Gothic, the widest of the European mediaeval architecture (22,98 m); façade and big escalinata baroque.

It contains remarkable works of art in his interior and in the Museu Capitulate conserves the famous Tapestry of the Creation (ff. XI-XII), extraordinary sample of the romance textile art, between many other pieces.

To his side, the Palau Episcopalian lodges the Museu d'Art, with remarkable collections of romance and Gothic, and surrounding the escalinata find the beautiful Gothic building of the Pia Almoina.

By the street of the Força goes in to the ancient Call or Jewish neighbourhood where lived a próspera community in the last mediaeval centuries with an important school cabalística.

Just across the cathedral, happened the portal of Sobreportes, there is the church of Sant Feliu, ancient monastery of canónigos and colegiata, with romance elements, Gothic and baroques and glorious sepulcros paleocristianos bedded in the presbytery.

Near, they are the Arab Bathrooms, of romance period (s. XII) realised on a model norteafricano. Further up of the river Galligants heaves the monastery benedictino of Sant Pere of Galligants, romance (s. XII), that lodges the Museu Arqueològic.

In front it is the small church of Sant Nicolau, romance, built on a martyrium paleocristiano.

Near of the river finds the Carrer of them Ballesteries, with a beautiful sight on the river in his backside, and also the Rambla, encouraged commercial centre and of convivencia with galleries porticadas; the Carrer dels Ciutadans runs parallel, with ancient houses solariegas, and drives to the Plaça of the Saw, with soportales, the House of the Ciulat and the beautiful Teatre Municipal, neoclásico (1860).

In the new Girona find some buildings of interest, like the ancient hospice neoclásico projected by Ventura Rodríguez (s. XVIII), the Hospital of Santa Caterina, baroque (s. XVII), with façade neoclásica, and diverse modernist houses of the architect gerundense Rafael Masó, like the Farinera Teixidor, the House Teixidor or of the Punxa, between others.

The park of The Devesa has more than 40 has, a big arboleda of bananas, and is the place of re-create of the gerundenses.

In the surroundings of the city finds the castle of Montjuïc, big fortress erigida from 1653 and demolished in 1809, and more to the east, the valley of Sant Daniel, opened in the postreras estribaciones of the Gavarres, of leafy vegetation, with the beautiful romance monastery of Sant Daniel, of monks benedictinas.

Excursions in the Zone