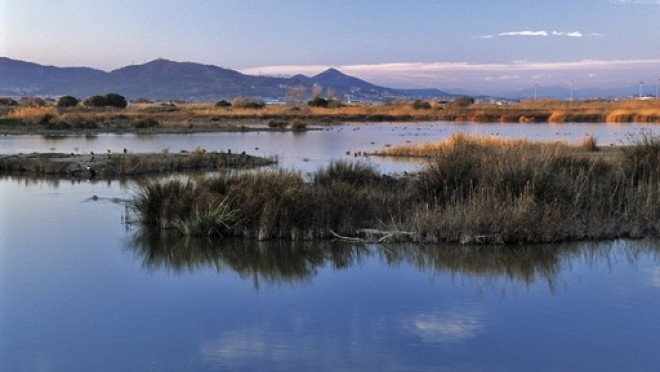 The delta of the Llobregat is formed by an extensive plain that occupies 98 km2 between the macizo of the Garraf and Montjuïc, and the congosto of Sant Andreu of the Boat north. The humedales coastal are connected with the aquifer and depend of him. The delta of the Llobregat is the second delta in extension of Catalonia and conserves one of the humedales more important of the country.

At present, the diversity of landscapes is the most notable characteristic of this territory.

In the middle of this mosaic of landscapes stand out, by his value, the natural spaces. The Delta has 20 natural habitats of European interest, 3 of which are of interest prioritario, with the aim to conserve them. It houses one of the scarce populations of trencadalla of Catalonia and an interesting population of Stachys maritime. In the humid meadows and in the pinewoods, have detected more than 22 different species of orchids. Also we find a population of invertebrates, of amphibians and of réptiles very considerable. They have given appointment more than 350 species of different birds and constitutes one of the most important routes for the migratory birds. By all this, the Council of the European Communities has declared ZEPA (zone of special protection for the birds) more than 900 hectares, that are protected like Network Nature 2000, and of these, near of 500 hectares are Partial Natural Reservation.

The laturaleza of the Delta in figures

The delta of the Llobregat receives a mosaic of landscapes of big natural interest. They predominate the humid zones, with the lagunas and the marismas; but also the coastal pinewoods, the crops, the beach, the river and the mar.

The lagunas and the marismas

The Delta is one of the three humedales more important of Catalonia. The lagunas are the characteristic element of the landscape deltaico and have a scientific interest very high, given his wealth ornitológica. They are also important like place of reproduction of coastal fishes and others of rarer, like the fartet. The lagunas bigger, like Ricarda and the Remolar, situated in the coastal line, present an alike state to the natural; other smaller have diverse origins. All are of salty freshwaters, with a gradient in function of the distance to the coast.

The flat terrains, without relief, depressed and that suffer temporary floods during the year call marismas. The depth of the zones flooded rare times ultrapasa the metre and half. The vegetation is formed by plants herbáceas, juncales and saladares, in function of the salinity. The marismas are associated indisolublemente to the lagunas. They are, in fact, the richest environment in fauna of the Delta, place of child, rest and feeding of a lot of migratory birds, between which stand out the ducks and the limícolas. His wealth remains self-evident in the toponyms, with names like the marisma of the “Philippines”, also called «Coto Africa», evocadores of places paradisíacos full of birds.

In the Delta find some of the pinewoods of pine piñonero on dunes rather conserved of all the Catalan seaboard. They constitute a scarce habitat that has been declared of conservation prioritaria by the European Union.

The beaches of the Prat and of Viladecans have important natural values, since they conserve the vegetal and animal communities own of the coastal sandy areas and do compatible the public use with the conservation of his habitats.

The river is the element vertebrador of the territory, formador of the Delta. It has a very important paper like biological connector between the seaboard and the interior, and also is an axis of natural communication between the municipalities of the region, with a potential lúdico very important.

The fields of crop

In the Delta carries out an intensive agriculture very rich, associated to the water of the channel of the Right of the Llobregat and to the water of the deep aquifer. The fields of crop are protected, the main part like Agricultural park, and act like area amortiguadora between the areas urbanizadas and the natural spaces.

The areas protected of the delta of the Llobregat have almost six kilometres of coastal zone. The platform deltaica is very rich in invertebrates of sandy zones and in fishes, sustenta an avifauna marine very important, with big concentrations of pardelas Balearic some years, and even there is cetáceos, like the dolphins mulares and the dolphins listed. The organic rests that arrive to the coast serve of food to a community of invertebrates that afterwards are consumed by the limícolas migratory.

The vegetation of the delta of the Llobregat stands out by the diversity of the vegetal communities that receives and by the oddity of some of the most emblematic species that find . The mix of freshwaters and salty, the sandy terrains and arcillosos, the occasional or permanent flood are factors that explain the diversity and the singularity of the vegetation deltaica.

The Delta houses the main population of trencadalla and one of the few populations of Estaquis maritime of Catalonia. They have registered 22 species of different orchids, being one of the richest zones and diverse of Catalonia in orchids.

The Delta receives significant examples of the vegetation of the marismas and of the coastal sandy areas, as well as some of improve them areas of coastal pinewood of pine piñonero on dunes of our country, with a big wealth in funguses.

The delta of the Llobregat is very important for the avifauna, since it is a strategic point inside the migratory route of the Mediterranean western that joins Europe and Africa. In the Delta have quoted more than 360 species of birds, this figure is one of the highest of species seen in the Iberian Peninsula.

The Delta is, for the birds, zone of rest, of dumb, of feeding, of nidificación or of invernada. It considers an area of global importance in the scientific inventories, since it receives species of conservation prioritaria in our continent. By this was declared zone of special protection for the birds (ZEPA), because it gathers important populations of birds of interest comunitario prioritario.

They stand out important populations nidificantes of cigüeñuelas, chorlitejos patinegros, chorlitejos boys and zampullines. Also nidifican other species of distribution very restricted to Catalonia, with one or two only zones of child in the country, like the avoceta, the canastera, the charrán common and the white pot. The populations of birds invernantes also are of big interest, stand out the anátidas of different species.

The delta of the Llobregat receives regularly 3 of them 15 species in danger critic of extinction in Spain: the avetoro, the pardela Balearic and the eagle fisherwoman. Of these 15 species, 7 more have been quoted or are presents in migration. In addition to the in danger critical species, can find taxones in danger, vulnerable and almost loomed.

Also there is a stood out autochthonous population of galápagos leprosos and of fartets, small endemic fish of the humedales coastal west of the Mediterranean. In the coastal sandy areas stands out the population of the scarce lagartija cenicienta.

Between the mammals, stands out the population of bats, although it is not so numerous as it does some years: migratory species like the bat of Nathusius and other species that crían in the macizos of around and use the Delta like zone of feeding.

The invertebrates are not so known. Still like this, a lot of scarce species and loomed live in the Delta.

Natural spaces of the river Llobregat

Adéntrate In the interior of the space doing an itinerary of discovery of 3 km or one longer (5,4 km), until arriving to the mouth of the river Llobregat. Also you can arrive until the ancient buildings of Carabineros and the Semaphore following the channel of the Bunyola.

The inner itineraries are adapted for chairs of wheels.

Itineraries inside the park:

In public transport: The bus PR3 that has origin in the station of train of The Prat of Llobregat detains in the unemployed Cemetery South – Tanatorio, that is to little more than 1 km. Of the entrance of the natural spaces.

To pié or in bicycle: By the right bank of the River Llobregat, by the rural ways or by the road of the beach of the Prat, that has circulation segregada for pedestrians and cyclists.