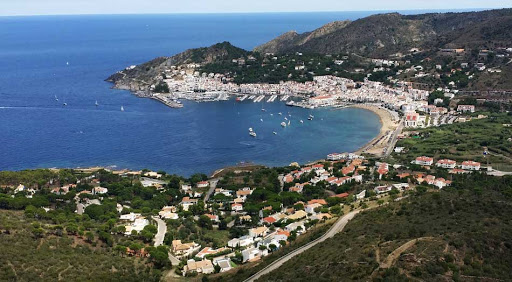 The region of Selva presents a rugged maritime façade by a macizo granítico that it is the manager of the character marcadamente rugged of his coast, with cliffs that achieve the 100 m, cut by small beaches or calas that have formed the materials eroded.

The landscape has a special beauty that confer him the blue of the sky and of the sea and the green of a dense vegetation of pinewoods and thickets.

It comprises the most meridional sector of the Costa Brava, and precisely here the journalist Ferran Agulló used for the first time, at the beginning of the past century, the calificativo that has had so much success.

The three sailor populations that form the sector, Tossa, Lloret and Blanes, have, in spite of his differences, a common tradition of maritime trade by the Mediterranean and afterwards with America, industries related with the navigation and also industry of caps of cork, in addition to a considerable cultural life to which contributed writers and artists attracted by the beauty of his places.

The modern tourism has incidido fully in these populations, that offer a big level of offer of accommodations and services.

Tossa Of Sea presents an inconfundible silhouette that confers him the enclosure of mediaeval walls that trepa by the promontory that closes by the south the bay of his name, enclosure reinforced by seven beautiful towers with matacanes and that recluye the Vila Vella, with rests of the ancient church and the palace of the governor, of Gothic period (s. XIV).

The Vila Nova extends by the beach and forms a merry and variegated group to the that follows him the sector of hotels and apartments.

The Museu Municipal, created in 1935 by the painter Rafael Benet, interesting preserve works of artists related with Tossa, between them Marc Chagall or Joaquim Sunyer, and pertinent archaeologic pieces of the roman villa of Els Ametllers.

Coastal tourist cores like thec wings Salionç, Giverola, Pola, Llevador, the beach of Llorell or Cala Morisca and, in the mountainous interior, the sanctuary of Sant Grau is a splendid balcony on the coast.

Lloret Of Sea is a sailor villa that has turned into the first tourist core of the Costa Brava. Beautiful maritime walk, houses decimonónicas and modernist, Gardens of Santa Clotilde, casino of game.

The Museu of the Sea is the main equipment of the Museu Obert of Lloret , integrated by the cultural and natural heritage of the municipality.

Situated in Can Garriga, building of the period of the indianos, receives the bequeathed museístico related with the navigation and the sailor history lloretense; it includes an extraordinary collection of maquetas of ships.

Of the traditional folklore remain the dance of the square and the maritime procession of Sa Relíquia by Santa Cristina (24 July), that carries by sea the image to his sanctuary, in boats adorned with guirnaldas and musicians.

Blanes Is the first population of the Costa Brava by the south, to the foot of the hill where find the rests of the castle of Sant Joan, and of the promontory that protects his port of fishing and sportive.

Interesting monumental group, with Gothic buildings work of the lineage of the Cabrera, like the church, part of the palace señorial or the source of the Carrer Ample.

In the Passeig of Sea, that goes until the tombolo of Sa Palomera, there is the monument to Joaquim Ruyra, that wrote on the sailor life of Blanes.

Two botanic gardens of big interest, Mar i Murtra, in the cala Sa Forcanera, with more than 5.000 species, and Pinya of Rosa, of tropical plants, especially cactáceas.

Sanctuary of the Vilar and urbanisations like the one of the cala Sant Francesc.