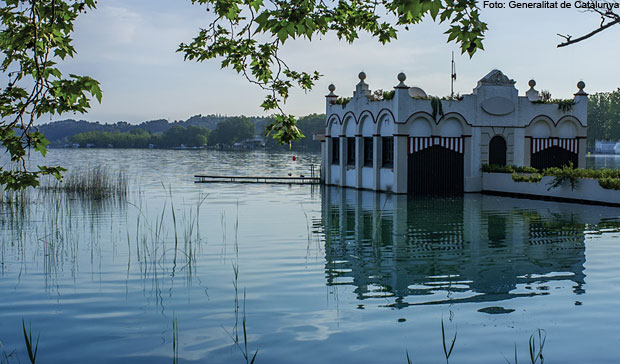 The lake of Banyoles has a singular character inside the Catalan geography for being at the same time tectonic and karstic –fed by manantiales subterranean– and chair a wide plain, continuation of the one of L'Empordà, of soft landscape, acutely humanizado, flanqueada to poniente by the saw of Rocacorba and his estribaciones.

It has form of eight, with 2.080 m of long and a maximum width of 235 m; desagua in the river Terri by five emisarios that cross, piped, the city of Banyoles, that gives him the name.

The lacustrine system of the lake complete with a series of small lakes that surround it, some of intermittent character, like the Clot d'Espolla.

The main tourist appeal of the sector is, definitely, this lake, beautiful calm surface in which it reflects the characteristic vegetation of carrizales, juncales and trees of bank, visited by aquatic birds, and where can practise a series of sports, especially the oar, the swimming, the canoeing, the sportive fishing (there is protective rule) and the triatlón.

But all the flat and the valleys more recónditos of the mountainous sector offer worthy places to be visited: small rural cores with beautiful architectural samples of the past, farms and houses señoriales, and yacimientos prehistoric.

Banyoles Is the capital of the region of The Pla of l'Estany.

Situated in the oriental bank of the lake, has his origin in the ancient monastery benedictino of Sant Esteve –Gothic building and neoclásico with interesting samples of art in his interior– and gives him prosperity the market, documented already in 1086, that is supported by vitality.

Other buildings of interest are the church of Santa Maria of Turers, the Lonja of the Dye, the Pia Almoina and the square porticada, mayormente of Gothic period.

Museu Darder d'História Natural and Museu Arqueològic Local: it has special interest the jaw of Banyoles found in Banyoles.

Porqueres, municipality of population disseminated in small cores, has his church of Santa Maria in the bank of poniente of the lake, exceptional sample of romance art with sculptural decoration in the door and in the interior.

Between the neighbouring populations quote Pujarnol, with the ancient castle and a beautiful dolmen, and Usall, with his romance church.

Sanctuary of Sant Patllari, with a beautiful panoramic, and the place of Them Estunes, of peculiar geological constitution.

Serinyà, in the sector north, also has a beautiful romance church and diverse farms of interest, but owe his fame to the yacimientos archaeologic of the Reclau (Reclau Viver, L'Arbreda and Mollet) and of the Bora Big d'In Carreres, with important material magdalenienses.

Besides we stand out Esponellà, with romance church-Gothic and big bridge of mediaeval origin, Palol of Revardit, with rests of the castle and enclosure fortificado, and Crespià, known by his romance church and the production of honey.

Excursions in the Zone