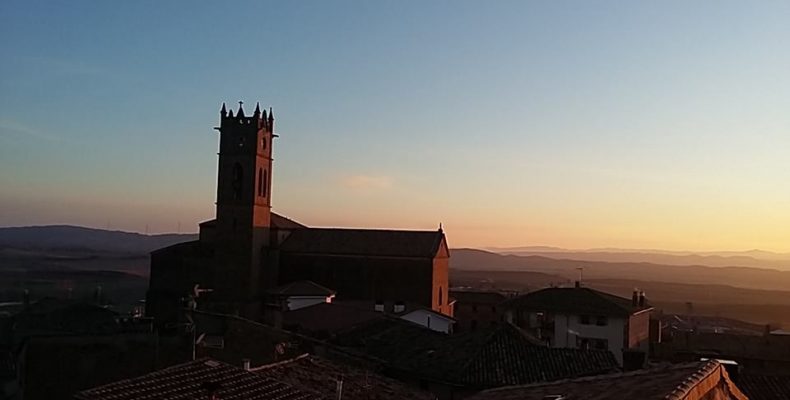 With this ilusionante project treat of rememorar and put in value the old Way of peregrinación, through the Pyrenees, until the Saint City of Caravaca de la Cruz having like main motivation the historical relation documented  the presence of the Knights of the Order of the Temper in these earths in the 13th century, when it arrived with them an astilla of Lignum Crucis, relating some of the main entrust and houses of the Order of the Crown of Aragon and the Realm of Murcia and with the influx of pilgrims to Caravaca in the back centuries.

In this sense have not been missing hypothesis that signal to the Order of the Temper like bearer of the lignum crucis  from his legendario origin in Jerusalén, coinciding surely with the sixth or seventh of the  Crusades, until Caravaca.

The true is that this military order remained established in Caravaca in the 13th century, constituting an important bailía in which it did his apparition Vera Cruz, being surely this institution the initiator of the referred cult.

It is by this that is not descartable the possibility of some trasiego between components of the Order and bailías or entrust of Aragon and Castilla, carrying of man to man and of territory to territory the naciente literate. In this sense fits the possibility, to day of today, to establish bonds between ancient bailías and  entrust that they can give foot to the configuration of a route that have like destination Vera Cruz of Caravaca, if we take into account the relation of said Order with a mediaeval historical way as it is the one of Santiago.

It is from the existence of the Lignum Crucis in Caravaca de la Cruz when they go recovering facts that testify the devotion to Vera Cruz in this part of the Iberian peninsula.

It serve of evidence, in 1363, the fact that a neighbour of Molina of Safe, in his will, left  established that it commanded a maravedí to Vera Cruz of Caravaca. Like this then , to tenor of the exposed, can affirm that  the cult to the Very saint and Vera Cruz of Caravaca, practically from his apparition and historical presence is recognised and consolidated already  in the 14th century. In them  it left clear reference to the trip of pilgrims from far parts until Caravaca, then earth of border with the Islam. Besides the apparition in the same 14th century, when seeming in 1384, of the ritual of the Bathroom of the Water, to the that attributed him powers milagrosos in front of adversities of natural field and in front of illnesses, converts   in another factor demostrativo of the consolidation of the cult and of the attraction exerted by the same, coinciding with the Parties of the Invention de la Cruz.

Another evidence, is the donation of the Maestre gift Lorenzo Suárez of Figueroa, in his peregrinación to Caravaca, in 1390, that shows the divulging of the cult to Vera Cruz in the fields of the Order of Santiago, or at least in his province of Castilla. The own registration, “Domini Laurentii  Çuareii of Figueroa Crossing Tecam Precepii Veri Notuum” (“Don Lorenzo Suárez of Figueroa commanded to do this box for the designated Vera Cruz”) the testimonia. This fact shows that the highest charge of the Order of Santiago, in the moment of the execution of this work, had in big appreciate to the lignum crucis of Caravaca and profesaba a deep veneración to the same, of here that it did not conform with a dádiva any one, but it commissioned a casket in which custodiara, of worthy way, the referred lignum crucis.

In third place the Bulas of Clement VII (1378-1394), from Avignon, in favour of the Chapel of the Saint Cross of Caravaca, explicitan of clear and concise form the implantation of this cult, no only in the zone, but in other places of Spain, as well as it leaves clear and meridian the reality in those moments (1379, 1392) of the existence of peregrinaciones, that definitely would do through the few ways and existent routes in the period, on the dilapidated network of shod roman of distinct category. The presence of the Knights of the  Order of Santiago, custodios likewise of the Way of Santiago, would convert to his time in a guarantee for those who dared to peregrinar to Caravaca. This also could be an acicate in the referred peregrinaciones, to the time that the Order, through his freyres and religious, turned into a glorious agent of diffusion.

Equally resalta the fact of the establishment of the cult to Vera Cruz and of peregrinaciones important to his chapel: «...And that to the Chapel of the Saint Cross of said real Castle concurre big crowd of the same congregation, that come of far parts, by the big miracles that has acted, and all the days acts the divine clemency, mainly ridding to the congregation of Cristo  captive by the sarracenos.»

Of here we can deduce that already to finals of the 14th century the cult to Vera Cruz had purchased a remarkable expansion in the Christian field (« ...concurre Big crowd of the same congregation, that come of far parts…»), converting his chapel in sanctuary of peregrinación, in a period essentially teocéntrica as it was it the Low Half Age, having like fundamental axis a fragment de la Cruz of Cristo that, as it affirmed in the period, had acted miracles.

Besides the Pontifex does express his wish that the Chapel strengthen like centre of peregrinación and of reception of alms, which would have to serve so that the defence of the Christianity, through the Order of Santiago, did firm in a zone border with the sarracenos.

The route templaria between Caravaca de la Cruz and the Way of Santiago.

As well as in different territorial areas of Spain has been possible to justify, of documentary way, the existence of ways that in his day served like roads of peregrinación to the Real Chapel of Vera Cruz of Caravaca (today Lower Basilica), having like fundamental pillars to the Order of Santiago and to religious orders such as jesuitas, franciscanos and carmelitas, dare to realise the theoretical establishment of this route, with difficulties, since the documentation in relation with the Order of the Temper and the area of his radication is quite scarce, had to definitely to the own reality of the violent disappearance of this military order.

The Order of the Temper had relation with the Way of Santiago and with Caravaca de la Cruz, playing in this last case an essential paper in the presence of his lignum crucis and, without place to doubts, in the starts of the cult to the same and of his diffusion. They were custodios of the Way and founders and guardians of the cult to the Saint Vera Cruz of Caravaca.

All the indications aim to an establishment of the templarios in Caravaca promoted by the Aragoneses. It is more, the Aragonese campaign, in front of the uprising mudéjar of the Realm of Murcia in which it took part acutely the Temper,  directed it the templario Pere of Queralt, Lieutenant of the Temper in Aragon,  achieving the Muslim defeat, in 1266.

The cult to the Saint Vera Cruz of Caravaca goes taking body and expands by both realms, carried by the freires templarios and those that people had relation with them and with Caravaca. But, on the other hand, the cult to the Apostle Santiago, when the Temper assent in the Realm of Murcia, carried already around three centuries, giving foot to peregrinaciones from distinct points of the Iberian Peninsula mainly during the Low Half Age. Of course also from the Realm of Murcia. It is more, a legend, that to day of today already has constituted in tradition, establishes that the Apostle Santiago arrived to the Iberian Peninsula disembarking in Cartagena (Murcia).

They could exist flows of pilgrims that visited one and other sanctuaries?

It is very likely. It is more, it seems sure that  they established and traspasaran the coming centuries. Like this, in the 17th century, specifically the year 1696, is perfectly ascertained and documented the baptism, in Caravaca, of a daughter of pilgrims, that would have to adopt the name of María de la Cruz, pertinent of the city of Estella, in Navarra, and that to his time had visited the sanctuaries of Monserrat and Santiago de Compostela. And what seems logical is that they did not go neither the first neither the only in the history, but rather they would follow a Christian tradition, surely of centuries, tied to the existent devotion around the sanctuaries referred, that originated movements of peregrinación and of interconnection between the same.

To the hour to try reestablish this route have taken into account several criteria:

– Historical antecedents that can justify, although only it was in stretches, the existence of this route.

– The common factor of the presence of the Temper and of pilgrims in good part of the points of the route.

– Economy regarding space, looking for, inside the possible, the shortest distances.

Like this then , we have looked for, in the ancient realms of Navarra, Aragon and Castilla, points that could adjust to the criteria that have established. And in this sense, marking these points, find the following referents:

The bases that sustentan the establishment of this route can be varied:

We are convinced that rewrite the History rememorando appearances of the same that form inseparable part of our acerbo cultural, at the same time that contribute of an effective form to the consolidation of Spain joining to his villages revalorizando his natural and cultural heritage and improved his possibilities of sustainable socioeconomic development.

It is this project a model of integration of all the current values for the development of Spain from his different communities, supporting in facts of big importance of our identity like village.