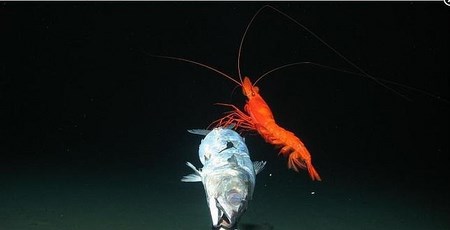 In this occasion go us to direct with a team of scientists and pertaining researchers to the Ocenalab of the University of Aberdreen to one of the bottoms that until the moment supposed an enigma for all we, and is not another that the pit of the New Hébridas that finds located in Vanuatu.

It is not any secret that this and other similar places save in his interior some creatures that never before anybody had had the opportunity to know, and between them can stand out the red and brilliant crustacean that observe in the upper image.

One of the positive appearances of this type of expeditions is that always they give us the possibility to discover new creatures, what supposes an advance regarding knowing the surroundings that surrounds us.

It treats of the first time that realises a descent in this part of the Pacific Ocean, which has achieved the 7000 m of depth and has given us to know new species very notable. One of the appearances that more has called the attention is the big quantity of distinct crustaceans that have been discovered between which also find some designated brótulas that have a main length of 1 m.

To carry out this expedition were used some special vehicles of reduced dimensions without crewmen whose aim is the one to carry some baits that commission to attract to the organisms that find in the zone to be able to be recorded through the cameras.

In total the process lasted 30 days and an important conclusion to which has arrived is that the organisms located in a pit any one do not have why coincide with which live in the rest of pits of all the world, what means that it remains a lot of way by in front to follow investigating new pits and of this form discover new species that never before had imagined.

It calculates that of this type of pits can have some 30 all over the world, locating the majority of them in the same Pacific Ocean.

After this expedition have obtained some interesting samples that later will be analysed in the laboratory with the aim of averiguar his main characteristics.

Also it has called the attention of the team of investigation the fact of have not located grenadiers, a species that generally lives in this type of pits, and the conclusion to which has arrived of his absence is that it is due to the fault of food in this concrete pit, which does that it treat of an ideal place for the brótulas, which by usual norm do not are used to to be so abundant in number.

By all this are faced with a step forward that will give place to new expeditions whose main aim is the one of averiguar all that that save our waters and of this form know a poquito better our planet because, one of the most curious appearances in this sense is that we know better the moon that the bottom of our oceans.