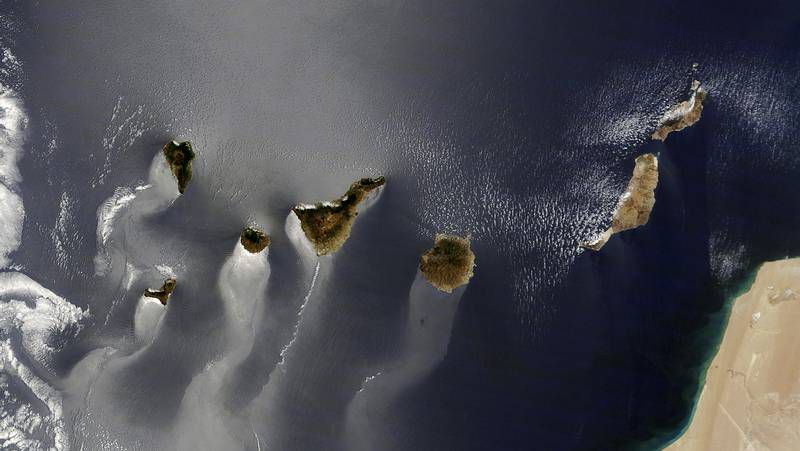 As many of our readers already will know, the NASA photographs all the years the terrestrial surface, and like result of this obtain some truly surprising captures and that call the attention to all the scientific community no already only by the fact that it allows to take out conclusions and analyse new theories but also by the immense beauty of our planet.

By this reason, the Observatory of the Earth of the NASA has decided to summon a contest where expose the most interesting photographies with the aim that they are voted by the supporters through Internet.

In concrete this treats of the second announcement and again Canarian has the honour to win for the second time consecutive said contest.

The image that can see in the top is the winner in this year 2014 with 96% of the near of 50.000 votes received during the final where enfrentaba with another very interesting photography of a volcano of Siberia that found in eruption.

As we can observe, it treats of the moment that many of our readers will remember in which the underwater volcano of The Iron went in in eruption the past year 2013, giving place to a series of visual effects and surprising physicists that have called the attention of all the voters.

Regarding the winning photography of the year 2013, also of Canaries as we have commented previously, the manager of the prize was the following photography.

In these samples exposes a total of 32 images selected of those that obtain during all the year and proceeds to realise eliminatory until taking the decision between the two finalists.

Once finalised the tournament and having chosen this photo like the winner, the NASA has decided to present also other three images that go in inside the favourites of these islands by what have believed convenient to include them in the article of today.

Obviously, during the present year 2014 also will follow taking similar captures and look forward to to enjoy of surprising images that call our attention and, with any luck, Spain will go back to win again.

Nevertheless, the main aim of these announcements bases fundamentally in allowing that any citizen of on foot have the possibility to know the beauty of what surrounds us and concienciar more to the society that we live in a planet that offers us all what need, and is thus that we have to take into account the natural processes as well as our responsibilities so that during a lot of years follow having the possibility to know the world of this so surprising form.

In this occasion encourage to all our readers that contribute also those photographies that consider striking and that was worthwhile to take into account to be able to be enjoyed by all the presents.

For all those that want to know at first hand these contests recommend that you visit the official page of the observatory of the earth where expose .