The Red Sea is a place paradisíaco of crystalline and warm waters, the diving is his main
Attraction. 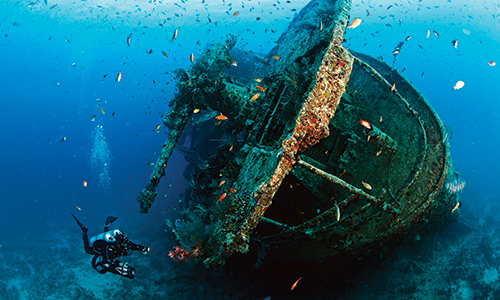 The Red Sea, situates south of the peninsula of the Sinaí, surrounding it by the Gulf of Suez, and the Gulf of Aqaba.

The diving realise it in the south of the peninsula of the Sinaí, that is a peninsula with form of triangle invested, situated in the Asian region of the Next Orient. Politically it belongs to Egypt, limiting north with the Mediterranean sea, west with the isthmus of Suez (that it joins it to Africa and by which discurre the channel of Suez), to the east, with the border of Israel, northeast with the Band of Gaza and south with the Red sea. His vértice meridional enters in the quoted sea defining two gulfs in the same, west the gulf of Suez, and to the east the gulf  of Aqaba.

The red sea is narrow and lengthened, surrounded by mountains with a half height between 1000 and 1500 metres.

One of the most notable factors of this sea is the big evaporation of the water, around 200 centimetres by year,  that is due to the high temperature of the air and the aridez of the regions of all the Red Sea.

The freshwater fault of the rivers and the limited exchange of water with the Indian Ocean, causes a significant increase of the salinity, that is the highest of all the seas of the Earth.

Another distinctive characteristic of the Red Sea is that it has an approximate temperature of 21 degrees to the 1.000 metres of depth. The cause of this unusual phenomenon is been due to the fracture of the big continental masses that causes that the magma of the mantle of the earth rise and  hot the water of the mar.

The coast of the Red Sea this surrounded of trainings of choral that generally are quite uniform, interrupted by the bays and estuaries that in Arab have different names of agreement to his morphology. The lugareños distinguish between the Marsa, a bay of easy access, open or with a big entrance and the  bottom of sand of hard coral,  and the Sharm deeper, that characterises by the narrow and difficult entrance to identify from the mar

The starting point of our immersions was the port of Sharm the-Sheij that it is a city of the peninsula of Sinaí, situated in the meridional extreme of the peninsula, between the coastal band of the Red sea and the mountain Sinaí.

Our trip of diving was organised from Barcelona by http://www.vanasdive.com/, and wine with us an instructor of this centre, ours wanted to, amused and professional Cristóbal, and  there already in the Red Sea sail with a ship designated “Golden Emperor I”, of the fleet of of ships of diving    of the company “Was Quen Flet”,http://www.seaqueenfleet.com/es/nuestra-flota/golden-emperor-i

In the ship had to two instructors more, Lara, of Spanish nationality, that works for the company and an Arab instructor, Hasan, the crew, charming and 15 willing people to enjoy of the diving in  the Red Sea.

Map of immersions of the  south of the peninsula of the Sinaí.

Local immersions of the Sharm THE-Sheikh

Sharm The-Sheikh is a city that aims on the oriental coast of the desert of the Sinaí, to half way between the narrow of Throw and the meridional tip of the Ras Mohammad. The Sharm THE-Sheikh voucher of a position turísticamente strategic, finding to the coat of the heights desérticas and of the north winds. It was the first basin protected of the Red Sea by environmental laws.

His tourist core finds in Na'master Bay, to 5 km. North of the bay of Sharm.

Of his port is of  where split our craft and where went back for recargar provisions for the ship to the 3 days to be sailing by the Red Sea.

The immersions that realise in Sharm THE – Sheikh were:

The Temper
Called like this because of his three pillars of reef remembering us to the columns of the classical temples. The pillars descend until depths of 30 metres His fauna includes fishes butterflies, parrots, bats and globe. Can see Napoleon.

Ras Umsid
This cape  is easy to recognise by his faro. The immersion begins hit to the coral reef where find numerous antias. Descending around 25 metres,  finds a garden of gorgonias. The fishes tigers and parrots are common and some that another jackfish, pargo, barracuda or tuna.

The reefs of narrow of Throw

The narrow of Throw closes the Gulf of Aqaba to twelve miles to the northeast of Sharm The-Sheikh. It takes his name of the island of Throw whose heights elevate of the level of the sea with rocky slopes.

We are on the discurrir of the African Oriental Pit, fails it tectonics that begins in the dead  Sea, continues by the valley of Jordán  along big part of the Red Sea. In the narrow of Throw the depth is of so alone 250m.

The immersions that realise in the narrow of Throw, went:

Gordon Reef
The most meridional reef in the Narrow of Tirán. Gordon Reef is recognised by the fuselage Louilla, bedded against the reef in 1981. Gordon has of points of tie up in splits it south of the reef with waters little deep and extensive sandy bottoms doing of this immersion the easiest i safe of Throw.

Thomas Reef
In Thomas can see variety of chorals including gorgonias, colonies of black and long coral alcionárias. It is possible to give all the turn to the reef in an alone immersion, if the time and the currents allow it.

Wood House
It is a long and narrow reef without points of tie up, that is to say only can realise immersions with zodiac. Can see Jackfish , Turtles, sharks and a big variety of chorals, although we did not see any shark.

Jackson Reff
It is the northest reef of the narrow of Tirán and easy to identify by the visible fuselage mercante Lara incrustado in him from 1985. In Jackson Reef abound the gorgonias and the coral of fire.

The reefs of the city beduina of Dahab

The immersions that realise in Dahab, went:

Canyon
The ship leaves you near of the entrance of the cannon. There are several entrances but the main and wider finds to 22 metres of depth.

Blue Hole
From the beach coralina accesses to a sima of 50 metres of diameter that adentra in the reef of the seaboard and that little by little does narrower surpassing the 90 metres of depth. Once inside the hole can go down to 50 metres of depth by a gallery of 10-12 metres of length that ends to open sea, in the blue.

The cape of Ras Mohammad

The cape Ras Mohamed is the point of immersion more famous of all the Red Sea. It has two tips, a to the east above the sea, call Skark Observatory, and another west, drop, but equally rocky, in front of which heave the famous reefs semiaflorados that break the blue of the water. It is National Park from 1989. Submerge in Ras Mohammad means to aim on the abyss of the Oriental Tectonic Pit African, of a  depth of  some 800 metres.

Map of The cape of Ras Mohammad.

The immersions that realise in Ras Mohammad, went:

Shark Yolanda Reff
The name is due to the rests of the ship mercante Yolanda, sunk in 1981, like consequence of a tempestad. What remains of the ship is to 200 metres of depth, whereas in the reef can see diverse materials, wires, topmasts  and two containers popped that transported baths and sanitaritos.

Anemonencity I Shark Yolanda Reef
Here on a plateau of 16 to 20 metres concentrates a big number of enormous anemonas surrounded of tens of fishes clown.

The reefs of the narrow of Gubal

The immersions that realise in the narrow of Gubal, went:

Thistlegorn
The rests of this carguero groins yacen to 28 metres of depth and is one of the pecios more spectacular of the Red Sea. The Thistlegorn was bombed by the Germans on 6 October 1941, while it expected lakk opening of the channel of Suez. It was a carguero destined to the transport of materials bélicos, formed part of the “Operation Crossed”. Today his impressive helmet of 9000 tonnes yace on a bottom of sedimentación to 28 metres of depth. It transported four vagonetas of railway, two torpedos, several cars, motocarros, motorcycles BSA, Norton, Jeeps, tyres, llantas for armed cars and boots for the troops.

The structures of the Ships achieve the 12 metres with which is easy bucear by his interior.


It leaves an answer Cancel the answer