The islands of Komodo is a rugged and solitary island, home of the legendario dragon Komodo. 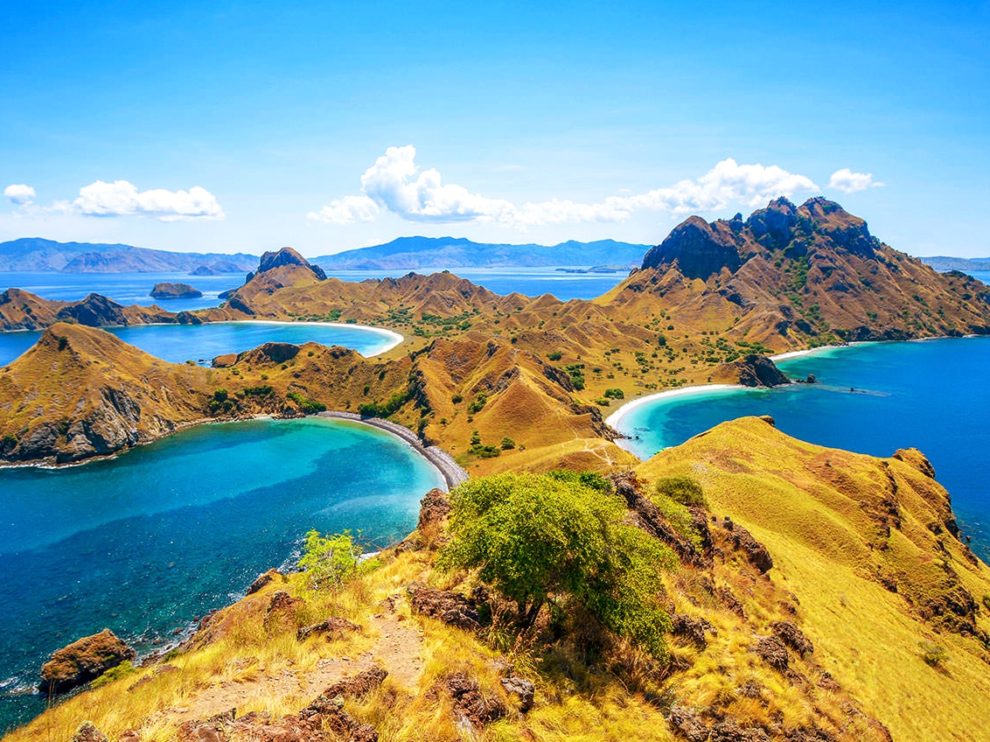 Indonesia, officially the Republic of Indonesia, is an insular country situated between the Sureste Asian and Oceania. The Indonesian archipelago comprises near of 17.508 islands, where inhabit more than 237 million people, converting to Indonesia in the fourth more populated country of the world.

The location of Indonesia in the edges of the tectonic plates of Pacífico, the Euroasiática and the Indo Australian, turn it into a place with numerous volcanos and with frequent earthquakes. Indonesia has at least 150 active volcanos,93 including the Krakatoa and the Tambora, famous by his eruptions devastadoras in the 19th century.

The trip consists in doing the crucero from Bali to Komodo, buceando by the islands Sangean, Gili, Rinca, in the ship “Mermaid I”, or what is the same “Sirena I”, www.mermaid-liveaboards.com

From Bali to Komodo goes through Nusa Tenggara that it is basically where realises the main part of the diving. Nusa Tenggara Is an impressive arch of islands situated to the east of Indonesia and next north of Australia. Esla Province more varied and gratificante to visit of Indonesia. Few zones in the world can compete with the variety of Nusa.

In Bali were to lojadas in the Hotel TAMUKAMI, www.tamukamibali.com ,a paradise of hotel, in the centre of Sanur, wonderful place to happen some days resting and buying.

The islands of Komodo i RINCA are some rugged and solitary islands, but lovely, situated between Flores and Sumbawa, home of the legendario dragon Komodo, the biggest lizard of the world, that could achieve the 3 metres of long and weigh more than 100 kg, and is able of zamparse animal of the size of a deer or a búfalo.

These remote islands are surrounded by the waters but tempestuosos of Indonesia plagadas of common betrayed and eddies.

Komodo Is National Park and comprises Komodo, Rinca and some neighbouring islands.

This diving characterises by three things: a lot of navigation because from Bali to Komodo there is more or less two days of navigation; the dragons of Komodo; or a very varied diving.

Varied because it combines waters pacify with water with currents, in which you can divisar sharks of white tip and blankets, in plenary enjoy of the current. These animals put in the middle of the current and leave that this stroke them. It loves them this game with the water, for them is a caricia or a divertimento, for us a danger, in fact have to anchor you in the rock with a cape of current, to be able to enjoy of the vision without that the current drag you. The diving in this case is not that it was complicated, simply have to go down fast, once deep down leave you carry by the current and when you arrive to the point wished anchor you with the cape of current to enjoy the pleasure to see to the sharks or the blankets.

Usually the water with current also association to the coldest water.

Varied because the sea combines turquoise colours with greens topacio, surrounded of some islands with diverse vegetation that remembers you to the stray islands of “Stray in the island”.

Green islands, almost empty, volcanic islands, solitary islands, filmed of full sea of Life. In the volcanic islands can bucear in his surroundings and like the volcanos even are slightly alive, and of the black sand go out bubble of hot air, that heats the water and does the very special diving.

In spite of all the beauty of this zone of diving still can see in his bottoms the destruction of the fishing with dynamite, the phenomenon of Boy, that cause the deterioration by insolación of the most sensitive reefs to the temperature of the years 90, and intuye the fishing with cianurito, that in other periods served to the fishermen lugareños like way of fishing.

From the 18m. Of depth the destrozos are less or practically non-existent.

The currents where the Ocean Pacify i the Ocean Indicate that they join and give place to a big variety of life. That is another of the characteristics, by the quantity of plankton that generates, of this crucero to Komodo. You can enjoy of variety of species so much big as small. From the nudibraquio, that is constantly present, to sharks, blankets or the fish Napoleon and giant turtles.

Of the ship Mermaid I and his crew, Andrea, Puti, Peter, amongst other, only could say wonders. Everything perfectly organised under the organisation of the captain, the guides of the diving and the crew. Everything ideal to do the easiest life i fun to the buceador.

The organisation of each day, was explained in a meeting at night, in the dinner, by the captain of the ship, and in a blackboard left us writing cual would be the planing of the following day and in which points bucearía.

The daily plan, more or less was the following:

Before each diving the captain does us a “briefing” or concrete explanation of the diving, explaining species that will find, chorals, situation, current, etc.
The points of diving that visit, amongst other, went   the following:

Day 16 July:
– It visits the dragons of Komodo
– Nusa Kode In the isa the Nusa Kode
– Cannival Rockc In the island Rinca
– Torpedo Alley enla island of RINCA

Of these points of diving stand out
– Hot Rocks Because it is in the island – volcano Sabgeag, that is a volcan alive and in the diving in black earth of volcano go out bubbles of hot air of inside the sand.
– Gili Banta Bay By the groups of chorals on white sand and fishes rid.
– Takat Toko By the sharks of white tip strolling by the current, and by his number.
– Crystal Rock by the turtles and breed of sharks sleeping under the corals, and fishes Napoelon.
– Pink Beach By the hedgehogs of colours, sepias, giant worms and nudibranquios.
– Cannival Rock in Rinca by the turtles.
– Blanket Alley by the blankets.
– Tatawa Besar By the turtles, giant sepias, nudibranquios.

All these marine animals in addition to all the quantity of fishes butterfly, parrot, book, Spanish, fish rock, fish clown,  morenas, culebras, etc. Everything in quality and quantity, hard and soft corals, etc.

To all this it is necessary to add the visit to the island of Komodo and his dragons, only alive descendants of the dinosaurs, some impressive beasts. Anyway that the trip diving to Komodo does not have waste, worthy to be remembered and visited and buceado.


It leaves an answer Cancel the answer