His height is not exceptional, but is the highest beak of Europe out of the Cáucaso and the Alpes. In any case a very interesting route.

The Mulhacén is the highest beak of the Iberian peninsula, no of Spain since this honour has it the Teide with his 3.718. The height of the Mulhacén is of 3.482 m and forms part of the National Park of Sierra Nevada. Enclavado In the province of Granada and pertaining to Sierra Nevada inside the mountain range Penibética.

The word Mulhacén comes from of Muley Hacén, castilianisation of the name of Mulay Hasan, penultimate king nazarí of Granada in the 15th century, of the that says was buried in this mountain.

Although his height is not exceptional, is the highest beak of Europe out of the Cáucaso and the Alpes, without explaining the Teide and some beaks of Greenland that although politically they belong to Europe, geographically belong to Africa and North America respectively.

After the Mont Blanc and the Mountain Etna the Mulhacén is the third higher beak of the Western Europe and occupies the place 64 in the world-wide classification.

The beak presents a side south quite soft that does not present difficulty any. The side north, of access shorter, is slightly more rugged.

The ascensión that present you here realise it in two stages:

Although already we have commented you that the ascensión to the Mulhacén does not have technical difficulty some it is necessary to take into account that a desnivel of 4.000 metres accumulated in two day can result a very hard itinerary but possesses the suitable physical form.

Neither that say, that if you decide you to do it in the months of summer, to the desnivel will have to add him a heat asfixiante especially in the first stage that can be really a problem added to this ascensión.

The footpath begins in the Electrical Head office of Poqueira, situated to some 1.550 metres of altitude. To this point can access in car following the road from Campaneira and to some three kilometres take the detour indicated to Centres it Hydroelectric by an in good condition track.

In this place confluyen the two main tributaries that give place to the River Poqueira: the river Naute and the Toril. A bit more advance, at the side of an informative signpost of the routes of hiking that there is in the zone begins the footpath that have to take, situated in the right margin of the river Naute.

After a strong rise begin to descend, going down to the river and crossing it in the inmediaciones del Cortijo of the Island. The valley narrow and the senda goes in in a ravine of leafy vegetation, to the time that just across the river can contemplate a lovely fall of water that precipitates ravine down.

To the little time begins the hard rise that will carry us after crossing the Acequia Low, to the Homestead of The Takings, situated to 2.144 metres of altitude and after 4,500 Km. And some two hours of trek, and later to the Acequia High.

We go up by a footpath with strong slope until at last the senda softens and can divisar a short metres the Shelter of Poqueira, in the Hoya of Peñón Black.

We will arrive to the shelter situated to 2.500 metres of altitude after 7 Km and some 3 hours of trek roughly.

From the Shelter of Poqueira goes out a way in direction to the Weathercock (situated looking to the shelter the way remains to our left). This footpath llanea until arriving to the River Mulhacén to begin to trace back the valley, in a zone in which there is not a senda very marked but suffices with following the course of the river by where was us more comfortable.

After some 3,500 kilometres and a 1:30h of trek arrive to the Laguna of Majano situated to some 3.000 metres of altitude. At the side of this laguna have the no saved shelter of The Boiler.

From the inmediaciones of the Laguna of the Boiler, and after crossing the track, goes out the senda that goes up to the Mulhacén. In this loma is easy to distinguish several footpaths that go up until the beak but is worthwhile to go up direct to the crest to arrive to the Collado of the Deer from where there is some glorious seen of the Hoya of the Mulhacén in the expensive north, with impressive seen to the Laguna of the Fly to the foot of the Wall North of the Mulhacén.

From here we go back to take the footpath that splits of the collado rising with quite a lot of hardness by the expensive West of the Mulhacén. After around 1 hour of rise from the Boiler, arrive to the Mulhacén, the highest beak of the Peninsula and from where have some esplendidas seen on the beaks that surround us.

After roughly an hour give descent and to some 2.920 metres of altitude is the moment to abandon the track. We will see some milestones of stone to indicate us by where have to begin to descend, but there is not way indicated, so it suffices with beginning to descend in clear direction to the shelter.

In half hour will arrive to the shelter. We carry some 10 kilometres and some 4 hours of trek from the exit of the Shelter.

From this point take the footpath by which rose the first day. We have a descent of 1.000 metres roughly until the Hydroelectric Head office by the Ravine of Poqueira.

We will arrive to the Head office after 17Km and some 6-7 hours of trek and 3000 metres of desnivel accumulated.

If you have attained it: Enhorabuena by the feat and for touching the ceiling of him Iberian Peninsula. 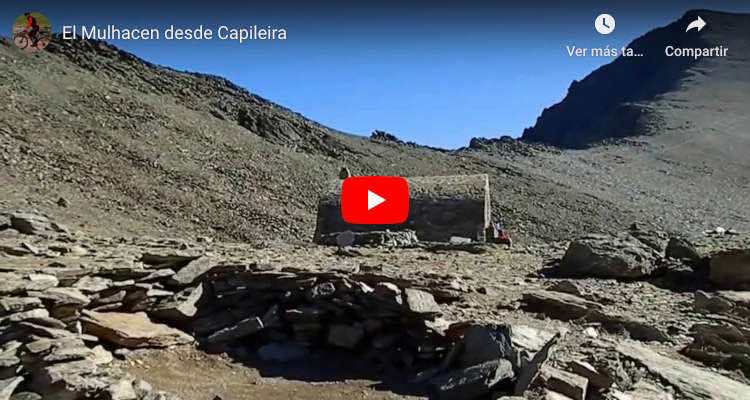 We leave you a video of the ascensión to the Mulhacén, spectacular seen from the peak. And in case it interests you, here you have this link with more information of cameras to record .